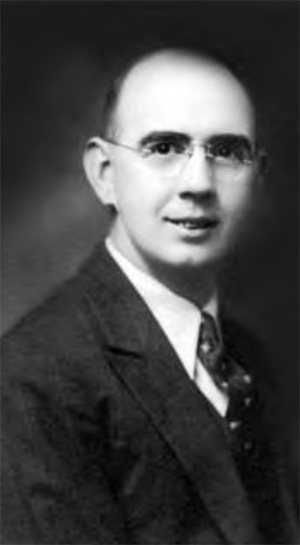 Years after the Ontario Rural Softball (ORSA) and Hockey (ORHA) Associations were formed, they were still regarded as “the best things to come out of the lean thirties for Ontario’s rural population.”

And they came about thanks to Blair’s Lorne Johannes. Johannes was helped in both ventures by many people, none more so than Sheffield’s Dr. J.G. Seaton, but were it not for the tireless efforts and great enthusiasm of Johannes, the associations would never have begun as they did.

“We just began it,” recalled Johannes years later. “In those days the rural kids had no competition to keep them at home in the small villages and farm communities.”

Born and bred in the small village of Blair – there were barely 30 houses and 200 residents – Johannes was the son of a black- smith and a storekeeper. He began delivering newspapers at age 12, foretelling a newspaper career that would last most of his life.

When his father suffered a stroke, young Lorne took over as village blacksmith, across from what was known as Nicholson’s

Inn.“I shod horses for six years and lived above the store,” he said. He played most sports in the village of Blair – known as the “Home of the Hornets” – so he moved into the role of organizer quite easily. The Hornets won a provincial softball title in 1931, and a hockey title in 1934. Indeed, Blair’s Hornets were perenni- ally strong. Blair and vicinity had some terrific athletes in those days.

Johannes’ preeminent role didn’t go unrecognized by others. Tommy Ivan of the Chicago Black Hawks wrote a letter to Johannes saying if it wasn’t for Johannes, he wouldn’t have climbed the sports ladder.

And J.W. Crane, professor of pharmacology at the University of Western Ontario, wrote a note of praise for Johannes on June 9, 1933: “I wish to extend to you my appreciation of the wonderful work that you and Dr. Seaton are doing… It will be difficult for you to visualize the good effect of your organization.”

Johannes remained involved with the association he helped form – he was an honourary secretary-treasurer and a charter member – until his death. Although scores of ball and hockey players from Ontario’s rural communities knew him, so too did thousands of boys and girls who had been paper carriers for him when he served as circulation manager of the Galt Evening Reporter, a post he held for 45 years.

Johannes, as a young man, had written Blair news for the Reporter, but got his start in the office on November, 1925. Two weeks after he began, an opening arose and publisher Allan Holmes made him circulation manager. In 1943 he began the Canadian Circulation Managers Association. When he retired in March, 1970, he had the distinction of being the longest-serving circulation manager in Canada. He estimated that he had worked with more than 5000 youngsters in all that time. “Responsibility and self-reliance,” he said, “were to be learned from carrying papers.”

Johannes was involved in many community endeavors throughout his life, in Blair and Galt. And, like Abraham Lincoln, he had a penchant for keeping notes in his hat. “One day a gust of wind came along while walking down Water St., and it took my hat, notes and all, over the buildings and down the river,” he said. Today that hat is in the permanent collection of the Cambridge Sports Hall of Fame.

Johannes was inducted into the Waterloo County Hall of Fame in 1968.