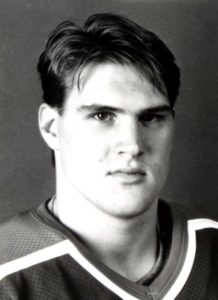 Born in Cambridge, where an earlier DeBrusk (Verne) had made a name for himself in local sports circles, Louie DeBrusk would go on to have a notable NHL career.

In 1989, Louie, a fast skating and hard-nosed left-winger, was selected 49th in the 3rd round by the NHL’s New York Rangers and carved out a reputation renowned for his fighting skills.

In his 401 NHL career games, he amassed 41 points playing for the Edmonton Oilers, Tampa Bay Lightning, Phoenix Coyotes and the Chicago Black Hawks.

After playing minor hockey in Port Elgin, DeBrusk got his start in junior hockey playing with his hometown Port Elgin Bears.

He then played Jr. B in 1987-88 with the Stratford Cullitons of the Mid-Western league, moving up to Jr. A with the London Knights of the OHL the following year.

In his rookie season at London he had 22 points (11 goals and 11 assists), and followed with seasons of 40 and 64 points, including 31 goals his last year in London.

In that final Jr. A season he also had 223 penalty minutes. NHL scouts took notice. After being drafted from the London Knights, DeBrusk had a short stint in the American Hockey League with the Binghampton Rangers and the Cape Breton Oilers, before getting the call up to the NHL’s Edmonton Oilers in the 1991-92 season, just a handful of years after the glory years of the Oilers, who were led for a decade by The Great One, Wayne Gretzky.

Appearing in 25 games for the Oilers that first season, he scored twice and had an assist, but more notably, had 124 penalty minutes.

The next season, appearing in 51 games for the Oilers, he amassed 205 penalty minutes, which would prove to be his all-time high during the rest of his career.

For the better part of the next decade DeBrusk would split his time between NHL teams — mostly the Oilers — and various AHL and IHL teams. His NHL tenure included principally the Edmonton Oilers, as well as the Tampa Bay Lightning, Phoenix Coyotes and Chicago Blackhawks.

All told, his professional career spanned 500 games, during which he scored 34 goals and added 25 assists. He also saw action in 15 post-season games, where  he scored two goals and had 10 penalty minutes.

Following his playing career, DeBrusk worked as the colour analyst for the Phoenix Coyotes radio broadcasts, a second career in which he has gained extensive experience.

On September 2, 2008, DeBrusk was announced as the new colour analyst for Rogers Sportsnet Edmonton Oilers television broadcasts, eventually becoming the main colour on-air analyst on the late game of Hockey Night in Canada.

His father Dennis was a good pitcher in the late 1950s with Preston, and his grandfather, Verne, was also a talented athlete in the Preston and Blair area and once had a tryout scheduled with the Detroit Tigers, though did not go.