Maddie Gardiner’s gymnastics career began at an early age—she was three when she joined the Cambridge Kips—and she loved the sport from the start.

“I just did gymnastics because I thought it was fun,” she said.

She tried swimming, but the water was too cold. Ballet was fun, but gymnastics was “cooler,” and different from other sports. Gymnastics had the four events or disciplines, “so you got to do something different on each one and there was a different focus on each one. I felt very powerful, I felt like I was flying, but I still felt like I could dance and this was still a ‘pretty’ sport.”

As she grew, her natural ability, not to mention top-notch coaching at the Kips, helped her reach the national team by age 11. She won silver in the vault at the event finals of the Voronin Cup in Russia in December, 2009, and earned bronze in both the bars and floor at the same meet.

At Elite Canada that year she won gold on the beam, and at the Gymnix meet in Montreal the following year, she won gold in the all-around event finals and individual gold in the beam and silver in the bars. At the Canadian Championships two months later, in B.C., she won the all-around silver in the senior division, and then represented Canada in the inaugural World Junior Olympics in Singapore that August. 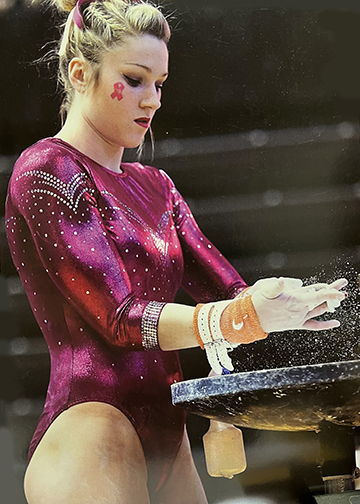 “Gymnastics combines a lot of fun aspects of different sports together. I liked the challenge of it, that I was always learning new skills, and it was also a very individualized sport.”

She never really patterned herself after other gymnasts; she loved the sport for how it made her feel. “I understood that I was never going to do gymnastics like Yvonne Tousek or Crystal Gilmore.” She was in the sport for the fun of it. “I just loved doing the gymnastics. I trained hard and worked hard, and Elvira (Saadi) is a wonderful coach and she made me very good.”

By the time of the 2012 London Olympics, where she was named an alternate, she was at her peak as a gymnast. She was ecstatic about making the team—”It was quite an honour’—but the sport had become more of a job, while the fun aspect seemed to be diminishing.

“When I did go to the Olympics, my high school years were a lot more work than they were fun because at that point you’re training 25-30 hours a week.” And balancing school with a demanding athletic schedule that involved travelling for weeks at a time. There were trips to Australia, a month in China, a month in Japan, competitions in Singapore, Qatar, and Russia. “So it was less of doing gymnastics for fun and it was almost like it was my job at that point.”

She loved travelling with the national team, and there were new cultures to experience.

Her time at GCI, although not the typical high school career, was great. “They (my teachers) were wonderful to me. They were very supportive.” As were her parents and family.

Her father was a math teacher at the school and would drive her to practice at lunchtime twice a week. She would stay at the gym while he returned to teach afternoon classes.

“I did not have a great experience at the Olympics,” she noted. “Team Canada is not good to their alternates.” As an alternate, she was not allowed into the Olympic Village, even though alternates from other countries were. Years earlier, at the 1992 Albertville Olympics, speed skater Derrick Campbell, an alternate, lived in the Olympic Village and wore the same Olympic uniform and sweats as other team members. For Maddie, she was expected to buy Olympic outfits at the Bay. So there were mixed emotions for her in London. 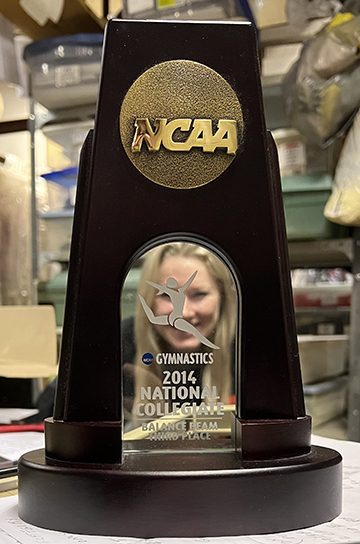 Shortly afterward, she broke both wrists in the gym, not wearing her wrist braces, and spent eight weeks in casts. But during that time, she realized that although she didn’t want to continue in Elite gymnastics, she wasn’t ready to give up the sport. She was only 18.

A friend who attended Oregon State University suggested she get in touch with them. After an official visit to the school, it was love at first sight. “I loved the coaches, the girls were lovely, the city was lovely even in January. It was really far away but it didn’t matter.” Gymnastics became fun again. “I loved college gymnastics and I love Oregon State. It was the best five years of my life at that point.” She excelled athletically, but also academically. “I felt valued and felt like I belonged. My very last routine was on the beam at the National Championships in 2017 and I nailed it. My coach gave me a big hug and we were all in tears. It was a fantastic way to end it all.”

Her parents visited often, and met up with her when she came east to compete.

There were many high points—twice finishing third in the beam at the nationals and being named female athlete of the year—but it also gave her a good footing for a medical career. After graduating from Oregon State in 2018 she took a fast-track nursing degree at the University of Toronto, graduating in 2020.