Mark Lee (born c. 1956) is a Canadian sportscaster with Rogers Sportsnet and formerly with CBC Sports. While at CBC, Lee covered the National Hockey League, women’s ice hockey, Canadian Football League, Olympic games and the Pan Am Games. He was born in Ottawa around 1956[1] to William and Doreen 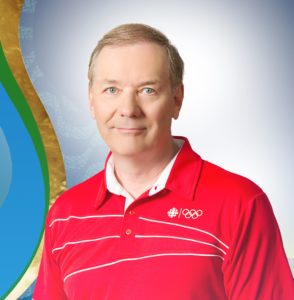 Croswell Lee, and he attended the Earl of March Secondary School in Ottawa.[2][3] He quarterbacked the Carleton Ravens football team for four years, graduating with a journalism degree. He then worked as a news anchor at CFCF radio in Montreal. Lee then moved to Toronto where he worked at CBC Radio as a national sports reporter where he also hosted the sports magazine show The Inside Track.

From 2008 to 2014, Lee served as the main western play-by-play voice for Hockey Night in Canada and worked first round playoff series. In addition, he read most of the pre-recorded continuity and sponsorship announcements on CBC Sports broadcasts (such as “The following is a [live] presentation of CBC Sports”).

For the 2008 Summer Olympics and 2016 Summer Olympics, Lee covered the track and field events for CBC.[4] Lee was the on field reporter for CBC Sports during the 1997 150 meter race between Donovan Bailey and Michael Johnson.[1]Lee has earned a Gemini Award, two ACTRA Awards.

He lives in Cambridge, Ontario with his family.[6]

In 2014 Lee was one of the high-profile sportscasters to be laid off from CBC amid budget cuts, along with his fellow veteran announcer Steve Armitage. Armitage did the play by play at the World Short Track Speed Skating Championships in Cambridge in 1998, right after the Nagano Olympics.

Veteran sportscasters Steve Armitage and Mark Lee were the latest high-profile casualties in the wake of massive budget cuts at the CBC.

Armitage, 70, lent his booming voice to CBC sports events for some 49 years — handling play-by-play on 29 seasons of Hockey Night in Canada, 27 Grey Cups and 15 Olympic Games.

“I loved my job,” said Armitage, echoing Lee’s sentiments. “I felt like I had been dodging the bullet. I really thought if the sports department was going to take a major hit, I’d be high on their target list because of the years I had worked.

“I was probably due to go. I didn’t want to go because I liked my job, but when you gotta go, you gotta go.”

At the time, most CBC sportscasters were on contract. Of four prominent sportscasters the network had on staff, Scott Russell was the only one to keep his job. Armitage and Lee were let go, while Brenda Irving, a Preston native, was moved to another department.

Just months earlier the CBC lost NHL hockey rights to Rogers Media in a mega $5.2-billion deal, leading to a dramatic loss of advertising revenue for a network that was already struggling with federal budget cuts. That was in November.

By April, CBC president Hubert Lacroix had announced 657 jobs would be cut to meet a $130-million budget shortfall. At the time Lacroix said that 42 per cent of the sports department would be laid off, trimming 38 sports jobs from 90 positions.

That August Lee and Armitage, with CBC ceding control of its long-held NHL coverage to Rogers Media-owned Sportsnet, were laid off, but Lee joined Sportsnet on a part-time basis, covering mainly amateur sporting events.