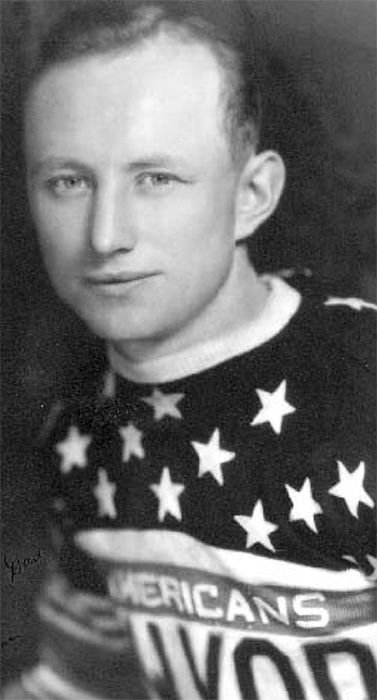 Perhaps the greatest all-round athlete to come out of Cambridge, Galt’s Normie Himes could do it all. A gifted hockey player, he was also an accomplished golfer and baseball player. Indeed, he was once offered a tryout by New York Giants manager John McGraw.

Himes played on two Intercounty championship Terrier teams in the early 1920s, teams which went on to win the coveted all-Ontario crown. He once led the league in batting with a .347 average.

But hockey was his first love. He was instrumental in bringing the Ontario intermediate title to Galt in 1921, just a year before the Galt Arena Gardens was built.

He and his brother George had grown up in a small, one-storey house on Shade Street, and when Galt Arena was built, it was just across the street from the Himes house. When the arena opened in 1922, Himes was one of the star athletes on the Galt squad, though it was teammate Reid “Speedy” Oliver who scored the first goal at the new hockey rink.

Himes was signed by the New York Americans of the NHL in the mid-1920s. Representatives from the Americans had come to

Galt to scout Himes’ teammate, Clarence Boucher, but it was Himes who left the biggest impression. In their excitement to sign Himes they almost forgot Boucher.

When Himes first arrived at Grand Central Station in mid-town Manhattan he was immediately taken over to Madison Square Gardens, the hub of hockey in New York. There, a large billboard proclaimed: “Come out and see the world’s greatest stickhandler in action.” Said Himes: “Wow! Who’s that?” “It’s you!” came the reply.

In the ensuing years he was a standout in the Big Apple for the Americans, where he won over a legion of fans, including a young New York Herald sportswriter by the name of Ed Sullivan. Sullivan wrote more than a few columns about the talented stickhandler from Galt. Indeed, one year Sullivan wrote that Himes was the MVP of the NHL. Sullivan would later go on to fame with his own variety show.

Himes also played alongside a teammate by the name of Al Murray, who would one day take up residence in Galt and coach the Junior Red Wings.

Small in stature, Himes had plenty of skill, playing 10 full seasons in the NHL. Despite having grown up in a small Ontario town, playing in New York didn’t adversely affect his hockey career like it might have done to others. Instead, Himes seemed to enjoy everything it offered. Indeed, he was in select company. Himes counted as his friends Babe Ruth and Lou Gehrig, among others.

Himes later coached minor pro and junior squads, including the Galt Jr. A Red Wings the year Terry Sawchuk played on the team.

An all-round athlete, Himes was an exceptional golfer and after his hockey –playing days were done, he was a golf pro for the remainder of his life, first as an assistant at the Waterloo – now Galt – Country Club, and later, as head pro at Southampton and, for 18 years, at Westmount in Kitchener. He capped his golf career by winning the Millar Trophy, emblematic of professional supremacy in Ontario.

Himes lived in later years on Berkley Road, in the last house beside the new Highland School. He had built the house with a high-ceilinged basement so he could practice his golf swing in the winters.

He died at age 59 in the fall of 1958 shortly after playing a round of golf at the Galt Country Club. It was said that Galt lost the greatest athlete in the history of the area that day.

In 1999 Normie Himes was named Cambridge male athlete of the 20th century.