Paul William Woods was born in Hespeler, and like most boys there, began playing hockey from an early age.

Form 1972 to 1975 Woods played Jr. A for the Sault Ste. Marie Greyhounds of the Ontario Hockey League, and as a three-year player on the team, Woods turned out solid offensive numbers each season.

The Montreal Canadiens in the 1975 Amateur Draft chose Paul Woods in the 3rd round, 51st overall. After spending two seasons with Montreal’s farm team in Nova Scotia – the Voyageurs – Woods was sent to the Detroit Red Wings, in 1977, where he played the balance of his NHL career. 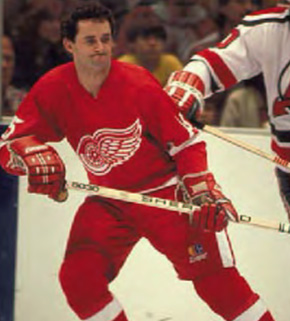 In 1977-78, Woods dressed for all 80 games with the Red Wings, scoring 19 goals and 23 assists for 42 points. As it turned out, that first season was Woods’ most productive in his seven years with Detroit. In his time with the Wings, Woods proved to be a very reliable and durable player, appearing in no fewer than 57 games in each season.

He remained in the Detroit area after his playing days were done and found a way to remain with the game he loves: he became an announcer. In 2002-03 Paul was back for his 15th year as color analyst for the Red Wings, continuing a career which began shortly after the conclusion of his playing days in the NHL.