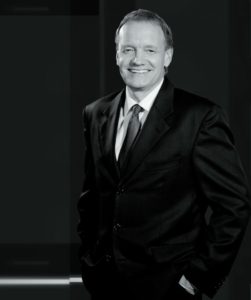 He was a colleague or classmate of some other notable Preston High School broadcasting alumni including Brenda Irving (CBC) and Jeff Hutcheson (CTV).

“When I was growing up, Preston consisted of about 12,000 people,” said Steinman, who was 13 when Preston joined Hespeler and Galt to form Cambridge.

His parents were both local school teachers — his father was a principal and his mother taught kindergarten — and Randy was always fiercely proud of his hometown roots.

During his long career as a sportscaster with NewsRadio and CTV, Steinman kept his old Preston High School football helmet on his office shelf.  When his son was born, he and his wife discussed what the boy’s middle name would be.

“It had to be Preston,” Steinman laughed.  “That was non-negotiable.”

He had an uneventful, middle-class boyhood, recalled Steinman, the oldest of four. “I was a typical Canadian kid, playing hockey in the winter and baseball and golf in the summer.  So it seemed natural that I would get into a sports-related career.  I remember having a strong interest in the media as early as the age of 12, attending William G. Davis Public School.”

Indeed, he did his first play-by-play commentary during a staff-student game in Grade 8. “That was my first actual broadcast. I remember thinking that was something I could make a career of.”

But in those years he also listened regularly to hockey broadcasts from KMOX in St. Louis on his transistor radio. He still fondly remembers the voice of play-by-play man Dan Kelly (a Canadian from Ottawa). As a 12-year-old, that experience also had an impact on his future career path.

A versatile athlete at Preston High School, Steinman was co-MVP of the Panthers’ senior football team in 1975. After graduating from PHS, he entered Conestoga College as one of 25 students accepted annually into what was regarded as one of the top Broadcast Journalism programs in the country.

“Probably the luckiest break of my life,” he grinned. “I loved it there.”

While at Conestoga, he got his first media job as an overnight announcer at CFTJ Radio in Cambridge. His first solo on-air shift was Thanksgiving weekend, 1979.

“Program Director Laird Elcombe hired me,” he said.  “I was so nervous that first show. I always wish I had kept a cassette copy of it. I’m sure it was awful.”

After a two-year stint at CKKW and CFCA-FM in Kitchener, Steinman returned to CFTJ in 1982. For two seasons he and John Edlefsen called Cambridge Hornets’ hockey games. They were in the broadcast booth for the Canadian semi-finals in Stephenville, Newfoundland and, two weeks later, when the Hornets won the 1983 Allan Cup at Galt Arena.

The following season, he moved to CJOY in Guelph to broadcast the city’s new OHL team, the Platers. Two years removed from college, he was content in radio because, “It was almost impossible for young Canadian journalists to crack into television back then. The industry was full of people who had entered TV back in the 1950’s, and they weren’t leaving until they retired.” 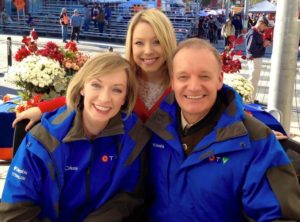 But on an impulse, he sent out 104 radio demo tapes across the country. “I promised myself I would accept the first offer of a full-time Sports Director’s job. Three months later, a News Director named Mike Lapointe asked me to work for him at CFCO NewsRadio. The station was based in Chatham, but only an hour from downtown Detroit.”

For almost six years he worked both sides of the border as a sports reporter out of southwestern Ontario and a NewsRadio sports correspondent in Detroit, where he and legendary manager Sparky Anderson were on a first-name basis.

“I called him George,” said Steinman.

His NHL and MLB reports were heard on radio stations across North America. He was a contributor to the popular “Insiders Say” segment for St. Louis-based ‘The Sporting News.’

“It was exhausting,” he said. “Every Monday-to-Friday, I worked a triple-split-shift throughout the day, and then reported from games on nights and weekends.”

But his time in Chatham was coming to an end. “In late September of 1989, I was at Tiger Stadium covering an important series between Detroit and the Toronto Blue Jays.”

As chance would have it, sitting beside him in the press box one evening was ‘Blue Jays Banter’ co-host Bill Inkol, the longtime Sports Director at CKCO-TV in Kitchener. Eight years earlier, Steinman had worked there in radio.

“That night, Bill and I had a terrific conversation as we caught up on old times. Two months later, he phoned to say he had an opening in his television sports department. I told him, “I’m a radio guy,” but he wanted me to apply.  I auditioned, got the job, and started working there in December of ’89.”

For the next 30 years, Steinman was a familiar face for Cambridge and K-W residents, as well as viewers throughout southwestern Ontario. He covered major sports events in the province, as well as the sports scene in Waterloo Region. He broadcast Oktoberfest Thanksgiving Parades to national audiences and emceed countless sports banquets, fundraisers and golf tournaments.

While at CKCO, he worked alongside veteran Sportscasters Inkol, Jeff Hutcheson, Don Cameron and Wayne Kooyman.  When Hutcheson joined CTV’s Canada AM in 1997, Steinman was named the TV station’s Sports Director. He held that position for 20 years, managing a department which included Darren Stevenson and Jamie Killingsworth.

During that time, Steinman fulfilled some personal childhood dreams by writing four books. His first was titled Crowded Maze. The final one, a children’s book, was co-authored with his son, Brody Preston, then ten-years-old.

In addition to being there when the Hornets won their 1983 Allan Cup, he counts among his other highlights the night Wilfrid Laurier won the Vanier Cup in 2005.

“That was the most fun night,” he recalled. “It was a Saturday night in Hamilton, and we got back to Waterloo and the city was just crazy with celebration.”

Another highlight came when the Kitchener Rangers won the Memorial Cup in 2003. 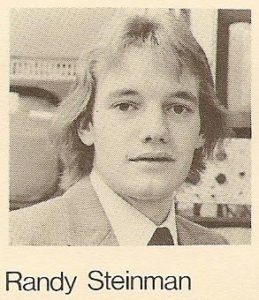 Between 1998 and 2001, Steinman returned to Conestoga’s TV & Radio Broadcasting classrooms — as a part-time teacher. From 2004 until 2016, he also served as an Administrator for MediaLine in Pacific Grove, California. He coached and mentored anchors and reporters throughout the U.S.

In 2019, after living in Kitchener for many years, he retired to Chatham with his wife, Sheryl Plouffe, a former Canadian TV personality on ‘The Weather Network.’

“This community and this station are so special to me,” he said at his retirement.

“My four grandparents were a Steinman, a Cressman, a Lebold and a Brubacher,” he said proudly. “You can’t be more Waterloo County than that.” 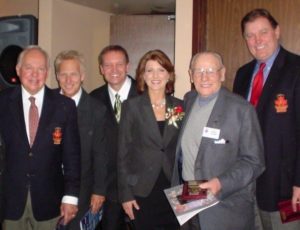