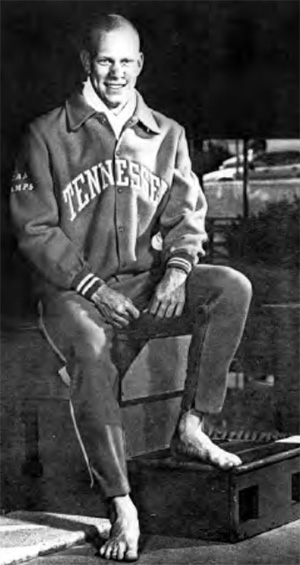 The pinnacle of Ray Brown’s swimming career came in 1992 when he represented Canada at the Barcelona Olympics in both the 100 and 200-metre backstroke events.

But his career was full of accomplishments, from his days as a member of the Cambridge Aquajets to his years as a standout with the University of Tennessee swim team.

Brown was named Cambridge’s Tim Turow athlete of the year in 1990, the year he won the Canadian 400-Individual Medley (IM) title at the Summer Nationals. But even before that Brown was a record setter as a member of a remarkable Aquajet relay swim team that won age group titles in Ontario and then at the Canadian championships. For their efforts they were named Cambridge’s team of the year.

Brown established some impressive records as an Aquajet, several times setting Ontario marks. Some of his club records lasted decades, and indeed, at the time of his induction, he still held several.

After accepting a scholarship offer from the University of Tennessee, Brown made himself known almost immediately. The tall, lanky ath- lete was the prototypical swimmer, and would shave his head for competitions. As a junior at Tennessee he was elected a team captain, a rare honour that had never been bestowed on a junior before. Yet he suffered homesickness when he first went to Tennessee, like many athletes experience after leaving home for the first time.

One of the things that helped him overcome that feeling was the sense of team, the camaraderie he and his teammates felt.

In 1992-93 Brown was awarded varsity letters at Tennessee and was recognized for his “outstanding leadership and contributions.”

Although a good deal of his time was spent in or around the pool, Brown was gifted academically. The Southwood graduate had always excelled in the classroom, and continued to do so at Tennessee.

Not surprisingly, he was a four-time Academic All-American and a nine-time All- American. Somehow he also managed to find time to serve on the Tennessee Volunteer Board.

Brown’s specialties for most of his career were the 400IM, one of the most gruelling swim events, and the backstroke. He earned some impressive results in international competition, taking a second and a third at the Pan-Pacifics, and reaching the podium at the World Cup level. 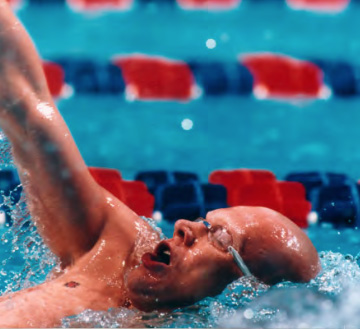 Along the way he earned the right to have the trademark red maple leaf tattooed onto his chest, something that many Canadian swimmers do when they make the national team.

In the summer of 1991 Brown decided to give up the 400IM in favour of the 100 and 200- metre backstroke events. It was no easy decision, but Brown, an analytical thinker, put plenty of thought into the decision. It was a risky move because there were only eight months to go before the Barcelona Olympic trials and he was coming off a year in which he won silver in the 400IM at the nationals. He had missed out on the previous Games by a hair.

A month after committing to the backstroke, the decision paid off when he earned silver in the 200-metre backstroke at the Pan-Pacifics.

“It was a big risk to be taking at this time in the four-year cycle,” he said. “The Pan-Pacs were a testing ground for me.”

In the months leading up to the Olympic trials in 1992, and with his degree all but completed, Brown took time off from his studies at Tennessee to train full time. He went to Boston’s Harvard University pool to train with a coach there, taking breaks from training to swim in three World Cup events that took him to Russia, England and Sweden.

When he called it quits on his swimming career, he had accomplished much that he set out to do. He had been seven years on the national team, third overall in the backstroke on the World Cup circuit in 1991-92, had earned a bronze at the 1987 Pan-American Games (200 back), and was seventh at the 1990 NCAA finals.

After earning his masters degree he eventually married and at the time of his induction, lived in the U.S. Virgin Islands.