As Red Laurence began his final year of junior hockey with the OHA’s Kitchener Rangers in 1976, his junior hockey career was progressing about as well as he could have imagined. In 1974 he was a member of Canada’s World Junior hockey team which played at the World Junior Championships (unofficial tournament) where he helped his team earn a bronze medal.

In 1975-76 – his first with the Rangers after two seasons with Roger Neilson’s Peterborough Petes – he scored 50 goals. Indeed, he had been a prolific scorer in each of his junior seasons, scoring 28 goals his rookie year and 40 the next.

And, for nearly four months in 1976, he was running away with the junior scoring title. Given that it was his draft year, he would likely be a top pick in the first round.

And then tragedy struck in the form of a devastating injury.

The injury happened without warning. It was December 2, 1976, at 12:01 in the second period in a game between the Kitchener Rangers and the Ottawa 67s when Red Laurence’s hockey career took a right turn.

Laurence, a Hespeler native who had grown up playing hockey, was far and away the top scorer in the Ontario Jr. A league.

“I got a breakaway killing a penalty,” he recalled. “I shot, the puck went in the net, and I got my feet pulled from under me.”

The ensuing collision resulted in a badly broken lower leg – both bones were broken – and he was finished for the season. It was a bitter disappointment, given that he was in his final year of Junior hockey and the NHL draft loomed.

That season he had 43 goals and 55 assists in 34 games and was having one of the best seasons a junior player had ever recorded. It took teammate Dwight Foster most of the season to overtake Laurence in the scoring race. Laurence finished seventh in the race that year, never scoring another point in junior hockey.

It was almost a full year before he could walk again.

The Montreal Canadiens had Laurence high on their draft list but after the injury, they passed. Laurence had removed the cast prior to the injury healing and had re-fractured it. At the time of the draft, doctors were unsure if Laurence would ever play hockey again.

So there was a lot of uncertainty surrounding his hockey future. Still, if he was healthy, and the leg held up, he would be a steal for the right team.

Instead of going in the first round, the Atlanta Flames selected him as the first pick of the second round – 26th overall – and Laurence signed his first NHL contract while sitting in Wellesley Hospital in Toronto waiting for surgery to repair his leg.

As a second-rounder, he was offered substantially less money than he would have commanded had he gone in the first round. 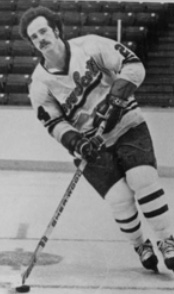 “They say that first-rounders never die,” said Laurence, noting that they often stay in the NHL for years.

Earlier, he had been rated as one of the top three prospects for the 1977 NHL entry draft.

As it turned out, his NHL career was relatively short. He made his NHL debut on October 11, 1978, when Atlanta traveled to Chicago, having missed the early part of the season while his leg healed.

He was traded to St. Louis later that season along with Ed Kea and 1981 second-round pick (Hakan Nordin) for Garry Unger on October 10, 1979, but missed part of the 1979-80 season with broken right ankle. Laurence also spent part of that season with the CHL regular-season champion Salt Lake team and scored the Adams Cup-winning goal for Salt Lake in Game 7 of 1980 final series vs. Fort Worth.

But his hockey career was far from over. He signed with the New York Islanders as an unrestricted free agent in 1981, but didn’t play with the Islanders. Instead, he starred for Indianapolis in the CHL, scoring a team record 98 points in 1981-82 and leading the CHL in goals with 43. He scored the same number of goals the following season and was the league goal leader – including four in one game against Dallas – and playoff points leader in both 1983 (22) and 1984 (13) and was a key member of the championship Adam’s Cup team in 1983-84..

“I think the best thing I ever did was go to Switzerland,” he said after spending five seasons over there. By then, of course, he and wife Melanie had a family – they had met when Red was in Atlanta – and Laurence’s career had been extended by the chance to play in Switzerland.

It was a great experience for the entire family. “It was unbelievable,” he said. “In just 10 minutes we could be on snow-covered mountains or take Bernie (their dog) to the lake.”

After several successful seasons, he finally decided to retire in 1991. He lives in Cambridge and has coached minor hockey, including a year with his father, Don.