Robert Benedetti’s journey to Canada’s national soccer team included a lot of twists and turns along the way.

Born in France to Italian parents who were studying there in the early part of the war, they returned to Italy and raised Bob in a small com- munity less than an hour’s drive from Rome.

There he developed a love for soccer, playing at every opportunity. No coaches or leagues, just the joy of the game.

He was 11 when the family came to Galt via ship from Italy to New York and then by train to Galt. It was the early winter of 1952 and they lived in an apartment on Dickson Street between the fire hall and old city hall.

“The snow was over my head and it was cold,” he recalled. He got off the train platform at the Galt Station wearing shorts. “It was memorable.”

But there was no youth soccer in town at the time. And the same was true when he began at Galt Collegiate. So a friend encouraged him to try out for football.

Don Rope was the coach, and instructed the players to line up for a race across the field. Bene- detti was first, and Rope, not knowing the Grade 9 rookie knew little about football, wanted him on the team.

Summers Benedetti played baseball, and became a pretty good ballplayer. He slowly learned about football, though there were few key learning moments along the way.

One occurred when he took a pass and ran toward the goal posts, trying to dodge tacklers while attempting to kick the ball through the uprights. He had no idea he could simply run the ball into the end zone for a touchdown, which he could have done easily. He finally crossed the goal line while dodging his opponents, but only by accident. It was his first, if unwitting, touchdown! 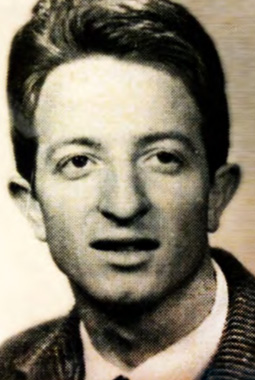 On another play during a tight game Rope told him to run downfield to the ball for an onside play where he was supposed to get to the ball his teammate had punted before the receiver could catch it.

“I got there first but waited for the guy to catch the ball and then I smashed him.” He thought he made a good play, but Rope gave him a kick in the rear, explaining what an onside play was.

One day after practice Benedetti noticed some guys kicking a soccer ball around on the side campus. They were older English players with the Galt Eagles and he impressed them with his abilities, even though he was only 13 or 14. He made their team, and finally got a chance to rekindle his skills in the game he loved. Eventually it would take him a long way, but first he closed out a stellar high school athletic career where he excelled at football, basketball as well track and field.

It was Rope who had first recognized his athletic abilities, and then nurtured them.

“He was a real mentor to me,” said Benedetti. Rope would often hook up with him on Sunday afternoons at Dickson Park to explain some of the finer points of the game. And it was Rope who told him he had to go out for track. Eventually Benedetti won the all-round CWOSSA track and field individual title, having finished first in the 200 yards and long jump, and second in the 100-yard dash and relay.

Upon graduation from GCI, and encouraged by football coach Carl Totzke, he enrolled at the University of Waterloo in mechanical engineering. But Waterloo, like GCI, didn’t have a soccer team, otherwise he would have played both varsity sports. He did so well that Ivor Wynn, McMaster’s athletic director and a TV college football commentator, said that Benedettii was “one of the best running backs in the country outside of pro ball.” Wynn’s name was synonymous with football in Hamilton, and eventually the Ticat stadium would be named in his honour.

Carl Fletcher, sports editor of the Galt Reporter and an early inductee into the Cambridge Sports Hall of Fame, also wrote glowingly about the young halfback. At Waterloo he was part of a potent running attack for the Warriors with captain and halfback Dick Aldridge.
During his time at Waterloo, Benedetti was invited to the Hamilton Tiger Cats pro camp, but after seeing the size of players like the legendary Angelo Mosca, he realized pro football didn’t figure in his future.

“No way,” he thought. “My game is soccer.” Soon afterwards, that dream became a reality. He made the Ontario all-star team, and then at the Canadian championships in Winnipeg he was one of 33 invitees to the national team tryouts on May 20-22, 1967. He was 26, and the tryouts were also a pre-Olympic selection camp. What’s more, he was chosen as one of the starters for the Pan Am team.

Canada finished a surprising fourth, losing 2-1 to Mexico in the quarter finals and then dropping the bronze medal game 4-1 to Trinidad and Tobago.

He counts a 7-2 loss to Scotland as one of his most memorable experiences from those days. The fact that he was playing against some of the greats – players like Jim Townsend, Harry Hood, Willie Callahan, and Sir Alec Ferguson (later coach of Manchester United) – was the thrill of a lifetime.

Benedetti was named Ontario’s athlete of the year in 1967. Eventually he began coaching and today coaches his grandchildren. “My dreams came true,” he says.