Roy Johnston was devoted to teaching the young boys and girls of Cambridge the fundamentals of hockey.

As founder of the Galt Minor Hockey School, Johnston’s dream was to form an organized hockey school dedicated to benefitting all youngsters who wanted to learn to play the game. There were people to contact, ice rentals to research, and other concerns, like financing, equipment and parental support for the potential program. It wasn’t easy, and in the end, it took four years of planning and preparation, but what he started — the Galt Minor Hockey School — had real staying power. It officially opened in 1967, Canada’s Centennial year, with 50 young players aged 5-9 registered.

The school grew every year and today, more than 40 years later, there are annually about 300 young players registered in the Galt Minor Hockey School.

Although the program evolved over the years, with improvements in the teaching methods and concepts, the fundamental goals have always remained clear. Johnston recruited Jerry Hobler to help out one night a week with the hockey school in 1972. By 2006, Hobler was still at it.

“Roy was a good guy,” Hobler said. “He was very dedicated to the kids and he got great enjoyment out of seeing the kids progress.” Year after year the pattern has remained the same. In September the young skaters take to the ice, many falling down more than they stand up in their first few trips to the rink. But by season’s end, they are all skating, turning, and have learned the basics in a caring, supportive environment. In the first year, the learn to skate year, the fundamentals are taught.

Children learn forward and backward skating, gliding, stopping, crosscuts and striding. They do all this while learning to enjoy themselves.
In the second year of the program, Johnson designed the training to be more demanding, going into greater depth and developing the basics.

In the second year they learn, for the first time, how to handle a hockey stick. By the third year, youngsters are spending two hours a week on the ice with their sticks and pucks, and a half-hour in the classroom where they are taught positional play through both instructions and video.

When they graduate from the three-year program they go into organized hockey. It was an idea whose time had come, but for Johnston and the Galt Minor Hockey School, it took the dedication of countless volunteers over the yearsto make the program the success it has become.

Indeed, the school gained a reputation for the dedication of its many vol-unteers, and recognizes longstanding volunteers with length of serviceawards. Many of the instructors and other volunteers stay on well aftertheir children graduate from the program. Some come back tothe school years later, once their children have gone through the minor hockey system, just wanting to give something back to the game. Graduates of the program also return, as adults, to help out. The time commitment isn’t something to be brushed off. It’s a long season, and the commitment is real.

Without the instructors, the school would soon come to a halt. Johnston led by example. Said Hobler: “Royput in a heck of a lot of hours.” He set the tenor for the next generation of GMHS volunteers. The school keeps attracting more quality volunteers with each passing year.

In the nearly 40 years since Johnston’s dream came to fruition, thousands of players have gone through the system with varying degrees of success. But overwhelmingly, the children have learned the basics, and had fun doing it.

By 1980, 13 years after the school was founded, Johnston was still spending 13-14 hours each week on the ice, dedicated to the children. 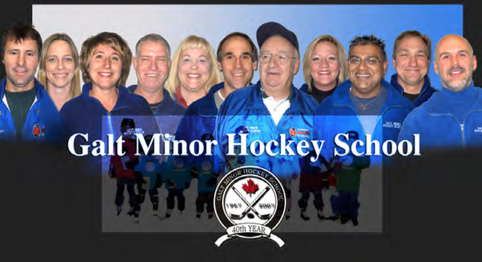 One of his volunteer coaches, Liza Gerrard, said it was a privilege to be part of the school. “Mr. Johnston has given to me far more than I could ever give in return,” she said. “I feel very privileged to be a part of the Galt Minor Hockey School.” She added: “This man shows his compassion by giving up his time to help others reach their goals in life. I think you have to have a pretty big heart to do what he has done.” His efforts, she said, were deserving of Citizen of the Year. It was a sentiment expressed by many parents and coaches over the years.

Roy Johnston continued as director of the Galt Minor Hockey School until December, 1989. He was grooming Al Findlay to takeover that autumn.

“Roy was going to retire after he taught me the first year,” said Findlay. “He passed away suddenly in December while I was still learning. Roy was one of the first to recognize that children at those very young ages did not have a learning pro- gram,” said Findlay. “He was one of the first to start a program, and today, it’s grown to 40 years old in 2006-2007. He had a gruff exterior, but a heart as big as he was. He was a true gentleman. The gruff exterior was just a cover. Cambridge Minor Hockey should be very proud that he was a major part of the association.”

The years come and go at Dickson Arena, home of the Galt Minor Hockey School. And thousands of Cambridge children have taken to that ice on a fall day in the spring of their lives. They have learned to play hockey, to have fun, and yes, many have even learned to love the game. All thanks to Roy Johnston and his legion of volunteers.