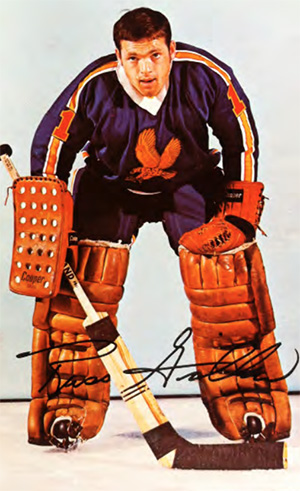 He played junior hockey with the Edmonton Oil Kings and in 1960, with Gillow in goal, the Kings played St. Catharines Teepees for the Memorial Cup.

The Oil Kings ousted Flin Flon in six games, and then took seven games to beat the Brandon Wheat Kings to advance to the Memorial Cup in On tario.

The series started in St. Catharines with a 5-3 Edmonton win. Gillow was the hero of the game. He took eight stitches over his left eye early in the game, and made 35 saves in what sportswriters called “a sparkling performance.”

Chicago Black Hawk coach Rudy Pilous, who owned and managed the Teepees, praised the Edmonton netminder. “This guy Gillow is the best goal-keeper the Teepees have faced all season,” he said.

But the injury caused such severe swelling around Gillow’s eye that he couldn’t play the next game at Toronto’s Maple Leaf Gardens. St. Catharines won the next two games handily, before Edmonton earned a 9-7 victory.

Gillow’s swollen eye proved troublesome the rest of the way.

“I could hardly see out of my eye,” Gillow said.

In the end, the home team Teepees, boasting future NHLers Roger Crozier in goal, and Chiko Maki, Vic Hadfield and Ray Cullen, won in six games. Gillow had been superb in net, as had Crozier, but St. Catharines out shot Edmonton by a wide margin.

Gillow was a 32-year-old rookie when he got his chance to play in the big leagues in the 1972–73 WHA season.

The WHA was an upstart league that had attracted several bona fide NHL stars including Bobby Hull and Gerry Cheevers. The league operated in North America from 1972 to 1979 and was the first major league to attempt to compete with the National Hockey League

(NHL) since the collapse of the Western Hockey League in 1926.

The WHA attracted some of the best players by paying more than NHL; 67 players jumped from the NHL to the WHA in the first year.

It gave players like Gillow a chance to play against the best.

In his first season Gillow was second to Cleveland’s Cheevers in lowest goals against average and helped the Los Angeles Sharks to a 3rd place finish and playoff berth.

Throughout his career Gillow played in 10 leagues but the highlight was his time in the WHA.

Over the next three seasons he only played 13 games for both the Greens- boro Generals and the Syracuse Blazers.

In 1974-75 he played 33 games for the San Diego Mariners under head coach Harry Howell.

He played again with the Mariners for the 1975-76 season and wound up his playing career in the 1982-83 season with the Spokane Chiefs of the WIHL.