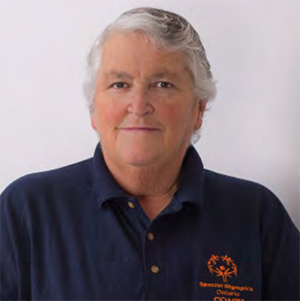 Sandra Goodwin grew up in Grand’Mere, Quebec, and attended school in Shawinigan, then began her adult life as a nurse.

After working for various hospitals she came to Galt in the late 1960s, where her parents had retired to, and where her sister had been living for many years. Here she took a position at the Hilltop Manor Convalescent Home in 1969.

In 1971, when her children were young, she accompanied them at the Youth Bowling Council (YBC) at Water Street Bowl, when Marlene Brethauer — she and husband Wilf owned the bowling alley — asked if she could stay behind and help with the Special Bowling which followed.

She agreed and has been at it ever since. That was nearly 43 years ago, which marks the beginning of a lifetime of volunteering with what is now known as Special Olympics Ontario (S.O.O.). She’s also helped with Cambridge Community Living at dances, day trips and special events.

Early on she found that helping special athletes made her feel good.

“They’re such a loving bunch of people,” she said. “They’re honest and do their best. And it doesn’t matter if they win or lose; they’re still happy.”

That’s why Goodwin has continued giving a helping hand to the organization in whatever way she can, most notably as a volunteer with the bowling program.

That involvement also coincided with the advent of the Can-Amera Games, and she was eager to help with the Special Bowling competition at Can-Amera from 1982 until the Games concluded in 2007.

Goodwin also drove the bus as a volunteer with the Can-Amera Torch Relay, the trek on which runners from Cambridge relayed the baton from Cambridge to Saginaw Township in the “away” years. Most of the time it was uneventful, but one year the bus broke down. It was a scramble to get another bus without slowing down the relay.

The relay wasn’t an easy assignment. She had to stay awake for more than 24 hours as she shuttled the relay runners during the 24- hour relay event.

As a volunteer with S.O.O. she has served in many capacities: as a scorekeeper, coach and convenor, the latter position totalling 15 years.

In 1982 she, Marlene Brethauer, former mayor Claudette Millar, Bill Mills and a couple of staff members from Community Living Cambridge helped form the Special Olympics Cambridge. It’s been going strong ever since, often sending athletes to the provincial and national Games.

From 1983 until the present she was heavily involved in the S.O.O. with Cambridge participants. She’s also had an athlete qualify for the World Games.

For 33 years she has been actively coaching, serving as treasurer, community co-ordinator and registrar.

During that time she has been a coach of the regional team on a yearly basis, and has been a six-time provincial coach and three-time national coach.

She served as the French interpeter for the Monaco Special Olympic Floor Hockey Team at the International Games in Toronto.

In her decades as a volunteer she’s watched many of the athletes grow and mature. “It’s been great to see how much they’ve achieved,” she said. “Some of them were just little kids when I started. Since then some have passed away and some have moved away, but I’ve always been impressed with how much they appreciate what we do. It’s great to help them rise to their potential.”

It’s been a fulfilling experience for her. “It just makes you feel good that you’re helping them improve. They appreciate it so much, and they do their best for you. And they love one another.”

After her children had grown she began a second career as a bus driver for Pen Ayr and Laidlaw School Bus Transit.

By the time she retired in 2006 she had won a 20-years safe driving award. She’s won other awards, including being named YWCA Woman of the Year for her volunteering, won the first ever City of Cambridge Inclusion award, and was presented with the Paul Harris Award by the Rotary Club, and, in 2012, the Queen’s Diamond Jubilee Medal Award.