Steve McKenna went to Galt Collegiate Institute and played minor hockey in town with the Cambridge Hawks of the OMHA, but he started thinking he might have a future in the sport when he played for the Cambridge Jr. B Winter Hawks in 1991-92.

The next year the six-foot six-incher went west to play for the Tier II Jr. A Notre Dame Hounds, and then went on to Merrimack College, a private Catholic college just north of Boston, to play for the Warriors for the next three seasons.

In 1996 McKenna made his professional debut with the Phoenix Roadrunners of the International Hockey league. He didn’t stay there for long, joining the roster of the Los Angeles Kings during the 1996-97 season. He appeared in nine games as a left-winger for the Kings.

Over the course of the next four seasons he played in 137 games for the Kings and by then was an established NHLer. In 2000 he entered the NHL Expansion Draft and was taken by the Minnesota Wild as the 37th overall pick.

After just 20 games with the Wild he was traded to the Pittsburgh Penguins on January 13, 2001 in exchange for Roman Simicek.

In 2001 McKenna joined the New York Rangers for the season before return- ing to the Penguins for the next two seasons.

During the NHL lockout year of 2004-05 he suited up for the Nottingham Panthers of the Elite Hockey League in Great Britain and the Adelaide Avalanche of the Australian (AIHL) League.

The next year, in 2005-06 he played with Alleghe in Italy and later that year for Kangwon Land in the Asia League.

All told, McKenna has the distintion of having played hockey professionally on four continents. It was a distinction born of necessity due to the lockout, and McKenna made the most of it. He particularly liked his time in Australia while playing for the Adelaide Avalanche.

He was so enamoured with the country – he admitted to falling in love with the Australian culture and climate – that when opportunity kocked, he opened the door to a new chapter in his life.

When in 2006 he was appointed head coach of the Mighty Roos, Australia’s national team, he was able to make Australia his home, though it would not be permanent. 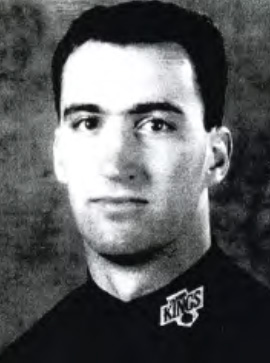 McKenna also played in the Asia League up to the end of the 2008-09 season where he played for the China Sharks, a team sponsored by the San Jose Sharks, and led all defence- men in scoring with 11 points, briefly playing with former NHLer Claude Lemieux before Lemieux returned to the Worhester Sharks.

The Sharks also signed former NHL goaltender Wade Flaherty and one-time Carolina Hurricanes and Florida Panthers right wing prospect Adam Taylor. In addition to serving as the starting goaltender, Flaherty was goaltending coach for the Chinese national team prospects, while McKenna was an assistant coach with the Chinese team in addition to his blueline duties. the team was based in Shanghai.

“I felt he could be a difference maker for our franchise,” said China Sharks GM Chris Collinsm at the time. “The fact Steve has played with Gretz (Wayne Gretzky), Mess (Mark Messier), Leetchie (Brian Leetch), Mario (Lemieux) and Jags (Jaromir Jagr) is very fortunate for our players as he knows how to win and can’t be fooled with when it comes to work ethic and expectations which are key ingredients of turning this franchise and program around.”

He closed out his playing career with the CSK VVS Samara (Central Sports Club of the Air Force, Samara) of the Russian Major League in 2009-10, and began coaching Alleghe in Italy.

All told, McKenna spent eight seasons in the NHL, Given that over half of all NHL players play less that 100 games during their career – and for approximately five per cent of players, their first NHL game is also their last – McKenna played in the NHL far longer than the average of four years.

Taking advantage of his size, McKenna was known for his physical play and his willingness to drop the gloves.

He also had the advantage of playing the game he loved in several far-off places. Hockey truly brought the world to him. And along the way he played with and against some of the game’s greatest players.