Racewalker Stuart Summerhayes came to the sport late – he was 55 – but he was simply following the old adage that it’s never too late to take up something new.

At that time he told his wife, Jill: “Don’t worry. I’ve only got two years to do it. Jaan Roos is hot on my tail. When he comes into my age category, I’ll quit.”

Roos was an experienced racewalker whom Summerhayes looked up to.

“He was a superb racewalker,” said Summerhayes, “and only three years younger than I was.”

When Roos, a former world champion, moved into Summerhayes’ age group, Stuart thought his records would be obliterated. Roos, a physician, gave Summerhayes a lot of pointers over the years.

“He owns some records in younger age groups that nobody’s going to touch.”

But many of Summerhayes’ Canadian records held. Summerhayes grew up in England, despite the fact that he is Canadian by birth. His father, Frederick Lyle Summerhayes, was a Canadian working for the Kaufman Rubber Company in Kitchener, who married a Brit- ish woman, Isobel, and worked in London. During the war, Stuart, then six, his younger sister and his grandmother were removed to Canada between 1940 and 1944 to live at A.R. Kaufman’s property on King Street.

Attending King Edward School in Kitchener, Summerhayes was taught to be a mannerly boy under Kaufman’s care.

“He (Kaufman) was very strict,” recalled Summerhayes. He didn’t give us an allowance be- cause he didn’t know if my father could afford it.”

A.R.’s pride and joy, he said, was a big flywheel at the factory (a flywheel that was manufactured by Galt’s Goldie McCulloch). Summerhayes returned to England in 1944 but the tide had turned and the war would soon be over. He had gained some weight in Canada, and because of that, was in the heavyweight division for school sports.

At boarding school, he played soccer, cricket, squash, tennis and fives (similar to handball), and even did a little boxing.

Later he would write a short story about his boxing exploits, called “My boxing career.” Because of his weight, he was placed in the heavyweight division, the same division as the school bully. “I dreaded it,” said Summerhayes. “I didn’t want to box.”

Neither did his first opponent, who was similarly averse to boxing the bully in the next round. Both boys fought a lacklustre fight, neither wanting to win. In the end, the judge said, “Poor fight!” and declared Summerhayes the winner.

“I then had to go on and fight the bruiser.” Predictably, he lost. But there was sheer joy for Summerhayes when the match ended.
He’s always been athletic. As a young man Summerhayes enjoyed squash, in particular, but by the time he was nearing 35, he weighed 195 lbs. That’s when he took up running, as a means of getting fit. Today, at 5’10”, he is 150-155 lbs. 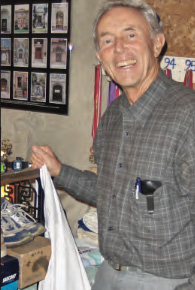 “I had gotten to the stage in life where I realized I would have to suffer in one of three ways: first, I could remain fat and look terrible; second, I could give up eating all the things I liked to eat; or third, I could work hard at exercise by walking and jogging.”

He chose the latter and has never regretted it. As a bonus, he never had to give up chocolate or ice cream, two treats he enjoys.

“I never did that well running,” Summerhayes said. “It wasn’t until I took up racewalking that I found my sport.”

Indeed, he was seemingly made for racewalking. From the age of 55, over the next 17 years, he established more Canadian records than any racewalker before him.

What was racewalking’s allure? Part of it was that he thought he could be competitive, and perhaps set some age group records along the way.

“Racewalking is not quite like watching paint dry, but it’s not terribly exciting for spectators most of the time,” he said. Still, for Summerhayes, it offered plen- ty of excitement. There were always records to strive for, ample opportunities for strategies to be formed and acted upon, and the intrinsic satisfaction of setting a PB and exercising. Still, it takes a huge chunk out of each day.

Jill enjoyed observing the psychology of the sport. She recalled early in Stuart’s racewalking career that even though he seemed to have the physical ability to beat a competitor named Mike Freeman. Freeman always seemed to beat him.

“I always knew he would pass me,” admitted Summerhayes, “and then I went to Ottawa for the Canadian Masters Champion- ships in 1992. I beat Mike handily that day and he never beat me again.”

“I’m a competitive person,” admitted Summerhayes. One need not look far to see just how competitive. In addition to his wall full of medals and trophies, several chronograph watches lay near his running shoes.

In 1991 Summerhayes began the Cambridge Racewalkers club. “I started it almost reluctantly at the old Y (on Queen’s Square) by holding a racewalking clinic. We had eight or 10 people who came out and stuck with it.”

Today, although the numbers have depleted, the club still has a presence.

Racewalking has been an enjoyable venture for the Cam- bridge athlete – he’s been nominated for the Tim Turow ath- lete of the year award on numerous occasions – and through it all, there was only one year in which he didn’t make it to the national championships. It was through no fault of his own. It happened in July, 2003 when the blackout that affected eastern North America prevented his flight from leaving Toronto. “They told me I could get a flight on Monday,” said Summerhayes, “but unfortunately, the race was on Sunday. That was the only year I couldn’t get there.”

He savours the times when he is in the zone, that area where athletes feel they are in perfect synchronization with their bod- ies, their abilities, and their environment. Such a time was in Edmonton at the Canadian championships when he was competing in the 10K event. “I felt as if I had inner reserves,” he said. “I felt great.” Not surprisingly, he won gold.

He had a similar experience on other occasions, such as a 20K event at East Lansing, Michigan. At that competition he was sleeping in a dorm but couldn’t get back to sleep at about 4 a.m. so had a long warm-up prior to the race. “I just began to feel really on top of things,” he recalled. “I chased Max Green, who was probably ranked second in the world, and another guy in his 40s who went by me, but five minutes later I passed him – I was just belting it out there. When I finished, my time was 1:55.25, a new record. I felt nothing could stop me that day.”

Typically Summerhayes would train six days a week, with a longer workout on the weekend (sometimes up to 22 K before big meets). “I used to be able to do 20K in under two hours,” he said.

The same desire that pushed Summerhayes to take up racewalking also made him take up row- ing in his 70s.

“I have a theory,” he said, and I think it’s a good idea in life, that when you get to a certain age, you should take up a new sport.”

But Jill knew part of his motivation. “So you can always set PB’s,” she said.

Stuart Summerhayes died on November 7, 2010 after fighting cancer. Days earlier (October 30, 2010) he had been inducted into the Ontario Masters Sports Hall of Fame for athletic excellence, along with, among others, Olympic gold medalist Donovan Bailey (Atlanta, 1996), giving a memorable and inspiring speech. He had hung on to life to make his final speech.