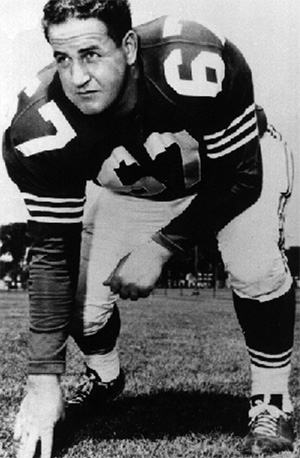 In 1964 a six-foot, 255-pound CFL lineman became the first player since the Schenley Awards were instituted to be nominated in all three categories – best player, top Canadian and outstanding lineman.

That player was Galt native Ted Elsby, No. 67 for the Montreal Alouettes. Ted, known as the powerfully-built redhead, was selected by his teammates as their most outstanding player, their Canadian player of the year and their lineman of the year.

Following his high school playing days at GCI, Ted joined the Brantford Redskins, a Montreal farm club. Such was his dedication that Elsby was known to jog from Galt to Brantford for games and practices, returning home by the same route when they were over.

At Brantford he distinguished himself early. “He was a first-rate fellow and player,” recalled Larry Pennell, a director on the club executive.

At 255 pounds and approximately six feet tall, Elsby was considered undersized for a lineman, yet was described by Leo Cahill as “the top Canadian lineman in the game.” Montreal sportswriters said he had “great downfield speed and the ability to hit like a train.” But his career was often plagued by injuries. At times, elbow and shoulder injuries sidelined him for lengthy periods. The injury list would eventually become a long one: dislocated shoulder, elbow, jammed neck, separated shoulder, bone chips. But injuries aside, when he played he stood out. Doug ‘Peahead’ Walker, Elsby’s first coach in Montreal, predicted great things for the newcomer. “Ted’s very eager and willing,” he said. “He has a great chance to become a star.” 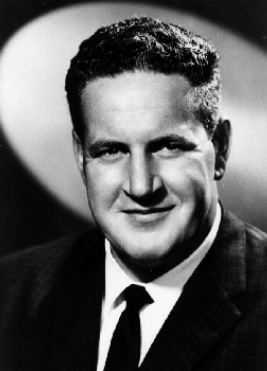 Indeed, only two years after breaking into the CFL in 1954, he played for the East in the Shrine All Star game. By then he was considered to be one of the best Canadian-born tackles in Canada. “He wasn’t as large as some,” said Alouette teammate Ed Learn, “but he was well-built and quick. He was a great competitor, very friendly and fun to be with off the field too. He was well thought of by his teammates.”

Elsby made his home in Montreal and raised his children there, enjoying a 12-year career with the Alouettes with legendary teammates such as Sam Etcheverry, ‘Prince Hal’ Patterson and Tex Coulter. He started up a printing business there after his retirement. But before retiring in 1966, he made CFL history. His record-setting nominations in 1964 were made even more remarkable as they followed a couple of typical injury-plagued seasons.

But by 1965, he had had enough. When he hung up his cleats, he cited injuries, age, and a losing ball club as his reasons. Besides, 1966 would be his 13th season, something the superstitious Elsby was concerned about.

There was one other reason. In a quiet talk with new Als coach Darrell Mudra, Mudra told members of his coaching staff that he thought Elsby should retire. He’d had a glorious run in the big time. There had been the all star games. Three straight Grey Cup games. Five times a league all star. It had to end some time.

Ted died suddenly in Montreal, the place where he’d had his biggest athletic successes, on Nov. 5, 1984, at the age of 52. His father Ernest, and his brother Wilf, also died at the same age. Montreal newspapers noted that Elsby was “one of the most respected and beloved athletes ever to play professional sports in this city.”