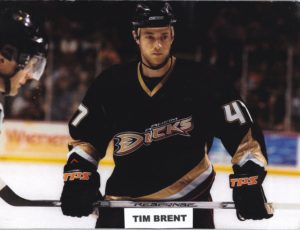 Tim Brent (born March 10, 1984) is a Canadian former professional ice hockeyforward who played over 200 games in the National Hockey League (NHL), most notably for the Toronto Maple Leafs and Carolina Hurricanes. Tim is married to Eva Shockey.[1]Brent grew up in the Cambridge, Ontario area playing minor ice hockey for the Hespeler Shamrocks of the OMHA and the Cambridge Hawks of the Alliance Pavilion League.[citation needed] He played in the 1998 Quebec International Pee-Wee Hockey Tournament with a team from Cambridge.[2]At age 15, Brent signed with the Cambridge Winterhawks Jr.B. team of the OHA Midwestern Ontario Hockey League in the 1999–2000 season. After completing his Jr.B. season, Brent was the 2nd overall selection of the OHL’s Toronto St. Michael’s Majors in the 2000 OHL Priority Selection.[citation needed]Brent began his major junior career on the Toronto St. Michael’s Majors of the Ontario Hockey League (OHL) in the 2000–01 season. He played on the team for four seasons, until 2003–04. During that time, he was drafted twice, both times by Anaheim. He was first drafted 37th overall in the 2002 NHL Entry Draft, but was re-entered into the draft two years later after not signing with Anaheim. In the 2004 NHL Entry Draft, he was selected 75th overall, again by the Ducks.[citation needed]In the 2004–05 season, he started his professional career with the Cincinnati Mighty Ducks. The next season, he played on the Portland Pirates, the Ducks’ new minor league affiliate. He began his 2006–07 season with Portland, but was recalled to the Stanley Cup-winning Ducks and scored his first NHL goal February 20 against the Vancouver Canucks. Brent did receive a Stanley Cup Ring, but did not play enough games to be included on the Stanley Cup.[citation needed]On June 23, 2007, the Anaheim Ducks traded Brent to the Pittsburgh Penguins in exchange for centre Stephen Dixon.[3] On July 17, 2008, Brent was traded to the Chicago Blackhawks in exchange for Danny Richmond.[4] On July 6, 2009, Brent signed a one-year contract with the Toronto Maple Leafs.[5]During his first preseason game of the 2009–2010 season, Brent tore his pectoral muscle – requiring surgery that would see him miss 4 months of action. After recovering, Brent returned to play with the Toronto Marlies, recording 28 points in 33 games. He was called up for the final game of the season to make his debut with the Toronto Maple Leafs versus the Montreal Canadiens.[citation needed]A strong training camp with Toronto saw Brent dress for the Maple Leafs in the season opener on October 7, 2010 versus the Montreal Canadiens. Brent immediately made an impact, scoring the first goal of the game at 6:42 of the first period. Brent went on to suit up for 79 games this season.[citation needed]A game on February 3, 2011 against the Carolina Hurricanes saw him block 5 shots and clear the puck in a single penalty kill. This play earned him a standing ovation at the Air Canada Centre as well as TSN’s “No Guts, No Glory” award. It was also a nomination for NHL Play of the Year.[citation needed]Brent signed a two-year contract with the Carolina Hurricanes on July 1, 2011.[citation needed]Upon completion of his contract with the Hurricanes, Brent signed his first contract outside North America, on a one-year deal with Russian club, Torpedo Nizhny Novgorod of the KHL on July 30, 2013.[6] After eighteen games with Torpedo, he was traded to Metallurg Magnitogorsk for Justin Hodgman. With Metallurg he won the Gagarin Cup.[citation needed]Brent returned to North America following the 2014–15 season, signing a one-year, two-way contract with the Philadelphia Flyers on July 1, 2015.[7] He was assigned for the duration of the 2015–16 season, to AHL affiliate, the Lehigh Valley Phantoms. In 52 games with the Phantoms, Brent contributed with 10 goals and 28 points before announcing his retirement from professional hockey at seasons end on May 25, 2016.[8]