From the moment Todd Harvey first skated with the Cambridge Winter Hawks, great things were expected of the Rockton native.

He was a fresh-faced 14-year-old playing with guys several years older, yet his gritty nature, and his unquestioned talent, meant that not only did he make the team, but also that he would soon come to be regarded as one of the top players in the league.

His time with the Winter Hawks lasted two years, during which he attend- ed Glenview Park S.S. but he was destined for even bigger things.

Harvey was selected as the top draft pick in the OHL entry draft of 1991, a distinction that placed him in very select company with former first-overall picks.

Chosen by the Detroit Junior Red Wings, Harvey didn’t disappoint. He was their star, and found life in Detroit to his liking.

In 1991-92 he was named to the First Rookie All-Star Team after scoring 64 points and a career-high 141 penalty minutes.

He began his international career as a 16-year-old member of Ontario’s Under-17 gold medal-winning team at the 1991 World Midget Championships. In 1992 he played for Canada’s Under-18 team at the Pacific Cup in Tokyo. That season Harvey scored career-bests in goals (50) and points (100) for the Junior Red Wings, and followed up the next season with a career high 51 assists as team captain (1993-94).

When he closed out his career in Detroit, he was the fourth all-time leading scorer in club history. 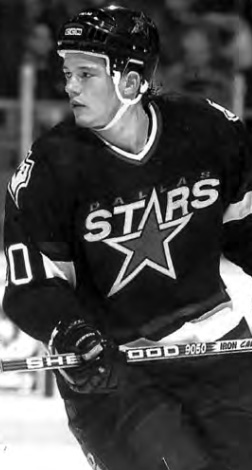 He captained not only the Junior Red Wings, but also the Canadian Junior team at the World Junior Championships in 1995 – he had been assistant captain on the victorious Canadian world junior team a year earlier – and came home a winner.

The ensuing gold medal he won capped off an outstanding junior career, and set the stage for his entry into the NHL.

A first round pick and ninth overall by the Dallas Stars in the 1993 entry draft, he played 40 games with the Stars in his rookie season and scored a career-high 11 goals. He was named Dallas rookie of the year that season. In 1996-97 he spent his first full season with the Stars, playing in a career-best 71 games and notching career-highs in assists (22), points (31), and penalty minutes (142- team leading).

In 1997-98 he played in 59 games, scoring nine goals and adding 10 assists. But he was traded on March 24, 1998 to the New York Rangers with Bob Errey and a draft pick for Mike Keane and Brian Skrudland.

In the spring of 2004 Harvey and the Sharks almost made it to the Stanley Cup finals, losing out in six games to the Calgary Flames.

In his fifth season with the Sharks, Harvey was sent to the minors, and allowed to leave as a free agent.

He signed with the Edmonton Oilers just prior to the NHL lockout, and joined the team when the lockout ended.

Harvey was part of the cinderella Edmonton Oiler team that made a run to the Stanley Cup Finals. However, the Oilers lost in game 7 of the finals to the Carolina Hurricanes. Harvey had 1 goal and 1 assist in the 2006 Playoffs. After that amazing cup run, Harvey was bought out for the rest of his contract along with backup goaltender Ty Conklin. Unlike Conklin, Harvey was unable to find a new team in the off-season.

On August 19, 2013 it was announced that Harvey would join the OHL’s Guelph Storm as an assistant to Cambridge native and Guelph coach Scott Walker.