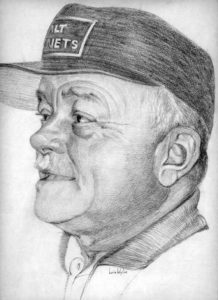 Toots Last was a local institution around Galt for several decades, and was one of the greatest athletic trainers the city has ever seen.

For generations of hockey players, Last was the focal point of their lives in Galt. One such player was Gordie Howe. Howe was a member of the Galt Jr. A Red Wings in 1944-45, when Last was the team’s trainer.

It was Howe’s first time away from his Saskatchewan home, and Last and his wife Mabel would often have the young players over to their house on Shade Street. In fact, it seemed like the players were always at the Lasts. After games. Before games. For supper. On weekends. After school.

“He took us in and looked after us,” said Gordie. “I have very fond memories of Toots.” 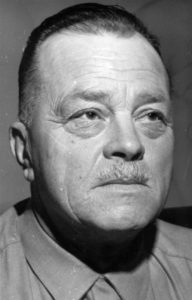 Howe held Last in such high regard that years later, when his sons Mark and Marty were playing in the Hespeler Minor Hockey Olympics, Gordie instructed them to pay a visit to Last at his home,just down the street from Galt Arena.

They knocked on the door and Last answered, “What do you want?” “Our dad told us to stop by and say hello,” they said. “Who’s your father?” asked Last. “Gordie Howe,” they said.

Last was born in Galt in the early part of the 20th century and from a young age, was interested in sports. He played football with the Oshawa BlueDevils, and then began his years as a team trainer in the late 1930s for the Galt Jr. B team.

When Jr. A hockey first came to town in the form of the Galt Kist Canadiens, Last was their trainer. From that point until his death he was a mainstay with all the Galt Junior A teams, including the Red Wings of the mid-1940s and the Black Hawks in the early 1950s.

He and Mabel were like surrogate parents in those early years, and the players got to know the three Last children – Robert, Doris and John – almost as if they were siblings.

The Last home was always open for players, and Saturday nights, after games, Toots would fry up bacon and eggs.

Mabel’s chili sauce was legendary.Toots made his own linament, and also served as trainer with the Galt Terriers ball team for a few years, but it was hockey where he made his mark.

He was stern, recalled fellow trainer Ed Heather, “but the players all liked him and had confidence in him.”

“He kept the locker room clean – he was a stickler for cleanliness – and that nor- mal smell of sweat that pervades most locker rooms wasnon-existent.”

Last, who worked for years down the street at Galt Malleable Iron, was a knowledgeable trainer. “He studied his profession,” said Heather. “He was very good at taping knees and ankles.” 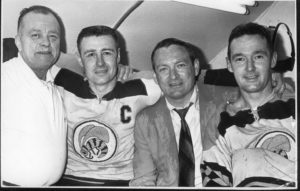 He was always there for his players and got to know them well. As a trainer, he would always arrive long before the players straggled in, and they would open up to him.

He’d alwayslend an ear. If he was a stickler for cleanliness, he was equally concerned with being prepared. On the road it would hurt his pride if he ever had to ask to borrow any supplies.

“Everything had its place and if you took something out you had better put it back in its proper place,” said Heather.

Last was a good friend of Leaf goalie Harry Lumley, and was part of the Galt Terrier Sr. A team which won silver at the World Hockey Championships in Colorado in the early 1960s.

He died in January of 1970 when his team, the Allan Cup champion Hornets, were playing in Germany. He had been too ill to make the trip.

In Munich, his longtime friend Wiggie Wylie read the telegram telling the players that cancer had claimed their trainer. And so ended the life of an extraordinary man who had befriended hundreds of young athletes for nearly half a century.