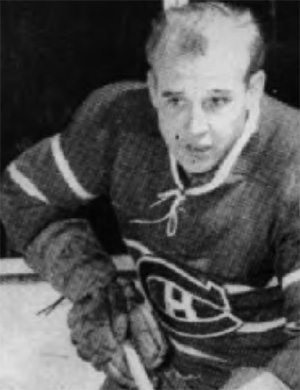 All of his contemporaries were agreed that Preston native Tex Kaiser was a talented hockey player. But what would surprise some was that he was just as good a baseball player, and perhaps even better.

Kaiser, many suggest, could have made it to the majors if he had concentrated his efforts on baseball. He was big, strong, could throw long and hard, run fast, hit, and had all the makings of a pro ball player.

Still, he made his mark in hockey, though despite all his talent, played just one season in the NHL.

Kaiser, who got the ‘Tex’ nickname after a stint playing professionally in Texas, made it into the NHL in 1950 when he played on a line with Rocket Richard in Montreal.

He was one of the best hockey and baseball players to ever come out of Cambridge.

He had been kept out of the NHL by Eddie Shore, who owned his rights, for years. Between the two there was no love lost. Although most people liked Kaiser, Shore was not one of them. The feeling was mutual. “Nobody liked Eddie Shore,” said Kaiser. “He was nuts. Just absolutely crazy.”

Like so many other talented athletes Kaiser saw some of his best years eaten up by war service after he joined the Navy in 1943.

When he finally got his shot in the big time, after the Canadiens had wanted him for years, his contract was bought back by Shore for $10,000 and again he faced the prospect of life in the minors. He finally retired from hockey in 1955, closing out his Intercounty ball career about the same time after his knees and body had weathered years of abuse.

Few players made as much of an impact on the Intercounty as Kaiser did. A consistent .300 hitter, he helped the Galt Terriers win the 1949 pennant, though the team lost out in the playoffs. That year he led the league in home runs and was regarded as one of the top few players in the Intercounty.

There is still speculation about just how far Kaiser would have gone in the baseball world had he benefitted from proper coaching and had he devoted more time to it. “But I loved hockey,” he said, though admitting that playing baseball exclusively would likely have prolonged his athletic career.

Kaiser, a natural athlete, was called a wild man by some, but his exploits on the ball field and on the ice, where he was an NHL-calibre player languishing in the minors for years, were so extraordinary that his legion of fans always included a host of youngsters all looking up to their idol with incredulity.