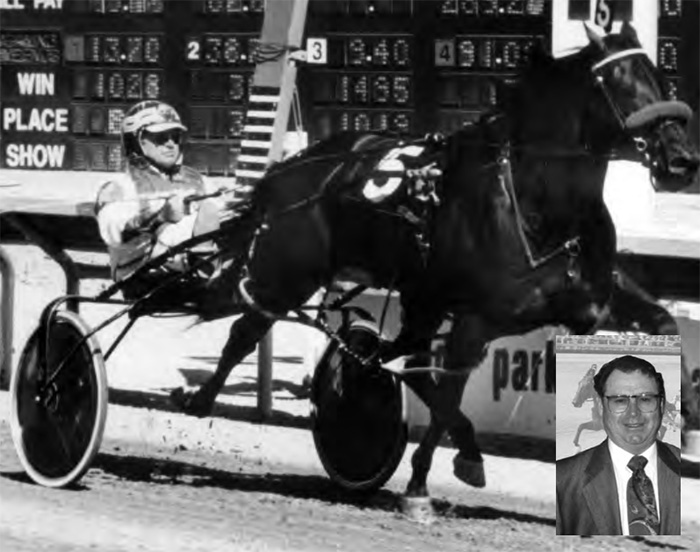 When discussing the great personalities in harness racing history, one need look no further than the northern outskirts of Cambridge to the beautiful 138- acre Wellwood Stables, and the head of this magnificent family enterprise – William Wellwood.

The green, white, and gold colours of the Wellwood racing stable are renowned on North American harness racing tracks.

Over the past 35 years William Wellwood has proven time and again that he has the reputation as an astute horseman from being able to select yearlings, to train them to their peak performance, and then drive them at the highest level of competition.

In 1995 and 1997 he won the O’Brien Award for Trainer of the Year, named after the great horse- man, Joe O’Brien, of Prince Edward Island. His horses have been honoured with O’Brien Awards an amazing 16 times.

Wellwood was born in Chatham in 1940 and raised in Merlin, a small community south of Chatham. From there he moved to Sebringville, near Stratford, where he picked up the finer points of harness racing from his uncle, Harold Wellwood, an accomplished southern Ontario horseman. After learning his trade he was ready to strike out on his own and Wellwood opened a tiny pub- lic stable at Greenwood Raceway. From there, his career flourished. After experiencing success with his first four horses, his stable quickly needed more room and he moved his operation to a 50-acre farm at Rockwood, which he later sold, and moved to Milton. In 1991, the 40-horse Wellwood Stable moved to its present location in Cambridge.

The harness racing community envies his record as a driver and trainer. Wellwood drove 2,891 winners to a combined total in earnings
of $15.6 million before retiring from driving several years ago. As a trainer his numbers continue to grow. As of 2002, he has trained nearly 1000 winners to a total of $17 million in purses.

As with any horseman, he talks about his favourite horses with a degree of reverence – especially Keystone Gary.

Revealing much about his character, his career highlight was not a victory but a second-place finish with Keystone Gary to the great American horse Delmonica Hanover at the International Trot in 1974, a race in which the best horses from a number of countries competed at Roosevelt Raceway at Long Island, New York. Like a proud father recounting the exploits of his children, Village Connection, Peach Pit, Armbro Leader, Armbro Marshall, Village Jig and Village Jasper roll off his tongue as he talks about other prominent horses in the stable.

Wellwood’s best year as a trainer came in 1997. Along with his Canadian Trainer of the Year Award, Village Jasper won more than $1 million and the Breeders Crown, Confederation Cup and Nat Christie. Rustler Hanover, a two-year-old colt, won the Metro Stakes and an O’Brien Award, and Village Connection won an O’Brien Award as Canada’s Older Pacing Horse of the Year.

As Wellwood reflects on his career the common themes of hard work and dedication are echoed in his words. “Horse racing requires a great deal of dedication – the more dedicated you are the more successful you are at the end of the day. It’s a job that’s seven days a week every week of the year.” His success shows that he is dedication personified.

Writing on Wellwood’s induction into the Canadian Horse Racing Hall of Fame in 2001,

Dave Perkins of The Toronto Star, said: “He goes in not only because of his statistical record, close to unmatched in this country, and not only for his numerous titles as Trainer of the Year, and not because of the hundreds of star sulkypullers that came out of his barn. He was a superior trainer and a driver who won a lot of races.

Yet what truly set Wellwood apart, and made this honor so particularly fitting, was his other hat: He was a trainer of trainers. It wasn’t only championship horses that came out of his barn. Some horsemen learned their championship ropes there.”

Bill O’Donnell, who broke in working for Wellwood, said, “You had to watch Bill to learn. He wasn’t much for explaining what he did, but if you watched and paid attention, you’d learn a lot. The thing he’d do with horses, the way he’d change equipment, their shoes, their training schedules. If you asked him what he was doing, well, he’d just get going with the hands, you know.”

Everyone knew. He used to explain things with a two-part shrug: Hands up, palms out. The trademark gesture spoke volumes. Two others who cut their teeth in the Wellwood stable were Tom Artandi and Ben Wallace.

Wellwood died on February 3, 2003 in Mississauga.