Gymnast Yvonne Tousek rose to prominence during the 1990s. The Cambridge Kips standout started in the sport at a very young age. By 12 she was already representing Canada on the international stage. It wasn’t terribly surprising given that she comes from an athletic family. Her mother and aunt were national level cross country skiers, while her grandfather was a for- mer ski jumper. Even her younger sister Chantelle was a national gymnastics team member, while her brother played hockey.

Yvonne Tousek was Gymnastics Canada’s female athlete of the year in 1995 and 1996. That year she was 26th at the 1996 Summer Olympic Games in Atlanta.

Tousek was a competitor with grit. When she claimed her first senior national all around title, she did so despite chipped bones in both ankles. She medalled on every apparatus, with gold on floor and uneven bars and silver on beam and vault.

At the 2000 Olympic Games in Sydney, Australia, she finished 34th in the women’s all-round final. Also competing at those Games was her Kips teammate Crystal Gilmore.

The 2000 Olympics marked the end of a long and illustrious international career for 2000 Canadian champion Yvonne Tousek, one of Canada’s best-ever female gymnasts. Over the span of six seasons, Tousek was the undisputed leader of the Canadian women’s team, which moved from struggling program to world leader under her tenure.

After winning the National Novice all-around championship in 1993 with the Kitchener-Waterloo Gymnastics Club, Tousek moved to the Cambridge Kips, under head coach Elvira Saadi, a 1972 and 1976 Olympic gold medallist. Saadi and her coaching partner, Vladimir Kondratenko, established their Soviet style of coaching. By 1995, Tousek had earned the right to represent Canada at the world championships in Sabae, Japan where she qualified for the 1996 Atlanta Olympics.

Tousek’s strong performance in Japan earned her a reputation as a rising star heading toward Atlanta. She earned an impressive 8th-place finish at the 1996 American Cup, with a 2nd place finish on the floor event.

Tousek was firmly entrenched as Canada’s top gymnast when she won the Olympic Trials. A world-class floor exercise performer, she was also known for her daring on the other apparatus: her repertoire included a front handspring-front tuck on balance beam and a Hindorff (free-hip to reverse hecht) release move on the uneven bars.

Tousek’s Olympic results were an improvement for Canada. After failing to place a single athlete in the all-around competition in Sabae, the 16 year-old Tousek qualified among the top 36 and ultimately finished an impressive 26th all-around. Tousek’s performance placed her among the world elite, and gave Canada a bona fide leader heading into the next quadrennium.

At the 1997 world championships in Lausanne, Switzerland, Tousek led the team to one of its most successful meets in history. In the all-around 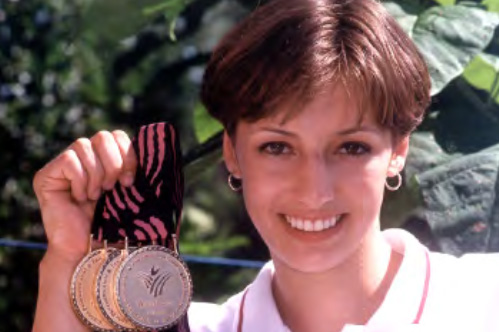 finals, Tousek nearly scored the most stunning upset ever in Canadian women’s gymnastics when she stood in 7th place after three apparatus. Beginning her meet on the floor exercise, Tousek’s participation in the all-around had been in jeopardy when she aggravated an ankle injury during the warm-up. Fortunately, the judges were sympathetic to the Canadian’s situation, allowing her the unusual benefit of performing out of competition order, moving to last in the rotation. With pain rifling up her leg, Tousek managed to successfully execute her ultra-difficult whip immediate Arabian double front mount, but had to water down her final pass, using a safer double twist instead of the double pike she executed in team optionals. Her gutsy routine was a success, and she continued through the competition with well-executed exercises on vault and uneven bars.

With only beam to go, Tousek was among the royalty in women’s gymnastics, her name appearing on the scoreboard with the likes Khorkina, Gogean, Amanar, and Produnova. A fall on the balance beam forced Tousek to swallow a frustrating, though still impressive, 20th-place finish, just slightly below the Canadian record standing of 15th-place previously accomplished by Lori Strong and Stella Umeh.

She was plagued with injuries from 1997 to early 1999, however Yvonne came back with a highly successful effort at the 1999 Pan American Games. With an international debut of an unusual sideways back handspring step-out on the beam, a move that now bears her name, a revitalized Tousek drove her countrywomen into one of their greatest eras, winning two gold (uneven bars and floor). Tousek was the one of the brightest stars of the show, helping Canada to a stunning upset of the United States in the team competition.

At the 1999 world championships in Tianjin, China, Tousek and her team finished 10th, qualifying a full team for Sydney. Yvonne competed amongst the best eight in the world for the floor exercise final, finishing 8th.

The 2000 Olympic Games was her swan song. Canada rallied to 9th place as a team behind the 4-for-4 performance of Tousek, who competed with a serious injury (bone spurs in her ankle). Tousek’s outstanding effort ranked 15th-best in the team competition. In the all-around she placed 33rd.

She went on to help UCLA, the defending NCAA champions with what was arguably the greatest freshmen class of female gymnasts ever assembled, to three NCAA Championships in the next four years. She finished her career with one NCAA (2001 bars) and one NCAA regional (2001 vault) individual championship, two perfect 10s, nine All-America honors, two NACGC Scholastic All-America honors and three Pac-10 All-Academic honors.

For her many fans, her accomplishments and sportsmanship will live on for years to come.