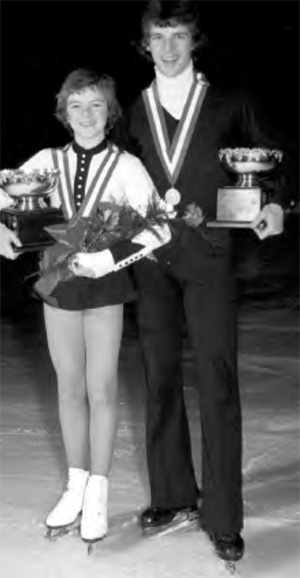 Sherri Baier and Robin Cowan skated together for only four years but they achieved what so few athletes ever claim: a world championship.

The pair began skating together with the Preston Figure Skating Club in May, 1974, and within two years had vaulted to the top of the world, winning the World Junior Championships in 1976.

What’s more, the pair won that prestigious title in what was their first-ever major international competition.

“That was the biggest highlight for me,” said Baier years later. “It was our first time competing at the international level, and to stand on top of the podium and hear the national anthem was pretty special.”

Indeed, she couldn’t hold back the emotions, the tears, as she and Cowan stood on top of the world.

Known for their athletic style, Sherri and Robin were the first Canadians – and among the earliest juniors in the world – to perform a throw double axel in national competition.

Winning a world title had been a dream of Robin’s.

“It was great,” he said. “It was a bit of a surprise. I went in thinking I didn’t know anything – it was our first exposure to the world championships, so I felt I really had no idea.”

They had risen up through the ranks in meteoric fashion, placing first at the Canadians in the novice level in 1975 at Quebec City – their first big meet – before taking second at both the national junior championships in 1976 and 1977. At the lat- ter event, PFSC members Josie

France and Paul Mills edged them for the top spot. Mills and France went to the World Junior Championships that year, while Cowan and Baier moved up to the Senior Worlds, where they placed a creditable 10th.

“That was another great experience,” said Cowan.

The two were members of the 1977 world team, and placed fourth at the Moscow Skate that year. 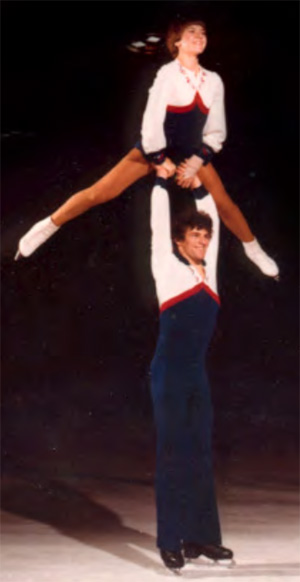 Baier grew up in Mitchell, while Cowan grew up in Kitchener. Cowan only began to skate seriously in 1973, with the Kitchener Figure Skating Club, before coming under the tutelage of world-class pairs coach Kerry Leitch.

Baier said the two hit it off from the beginning. “He was a few years older than me and I just listened and did what he said.”

Said Cowan: “We were very fortunate, very lucky. We seemed to have a natural rhythm and fit together.”

Having achieved all that they had wanted to achieve, which was far more than most, the two ended their pairs career in 1978.

“We won the senior Canadians in Victoria that year, and the Worlds were a month later in Ottawa, but after an injury to Baier, they had to withdraw.

Baier had been nursing a sore achilles tendon and calf muscle for some time, but in Ottawa she tore it.

“We can’t continue,” an anguished Sherri told Robin during the initial part of the competition. She wanted to go on but her coach wouldn’t allow it. A short time later, during the annual spring PFSC Ice Show, they officially called it quits.

Robin was about to enter the University of Waterloo, and Sherri would have to get a new partner if she wanted to continue.

“I was getting too big for Robin too,” she explained.

That summer she was skating at the Kitchener Aud. when she snapped her achilles tendon. Although she recovered enough to take some further tests – she wanted to coach – her career was over. She had seen the best doctors, including one out in Winnipeg who treated dancers with the Royal Winnipeg Ballet, but the prognosis for returning to such a high level was poor.

“I was kind of fortunate,” she said, “in that injuries decided the issue for me. I had seen others stay on too long, not knowing when to quit.”

They had reached the pinnacle and when they hung up their skates, they surprised some observers, but both knew it was time.