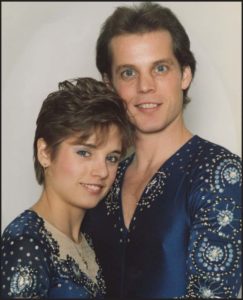 During their peak years Cynthia Coull (born in 1965 in Greenfield Park, Quebec) and her pairs partner Mark Rowsom (born April 16, 1959) were the top pairs skaters in Canada and among the best in the world. Yet theirs was a pairing that almost never happened.

Coach Kerry Leitch was trying new partners with Rowsom, and he’d pretty much settled on someone other than Coull. This presented a problem because Coull was to come from Montreal and Leitch had intended to try her with Rowsom. So he called her to say it wasn’t necessary to come as Rowsom had a new partner lined up. But the Coulls had already left Montreal and were en route to Preston. Leitch felt duty bound to have her go through the motions and try out with Rowsom. It was a good thing, as they quickly became the top pair in the nation.

They followed on the heels of some impressive club mates who put the Preston club on the map, skaters like Kathy Hutchinson and Jamie McGrigor, Sherri Baier (Phelan) and Robin Cowan, Paul Mills and Josie France (Jamieson), Lloyd Eisler and Lorri Baier, and then, before Rowsom paired with Coull, he was paired with Becky Gough (Magliarisi) for a number of years. The two competed at the World Juniors, finishing third.

Rowsom and Coull would go on to win three consecutive Canadian pairs titles, from 1985-1987.

Although they were on the ice for more than eight hours a day, by then Rowsom, a talented singer and composer, had begun university studies, first at Waterloo, and then at Wilfrid Laurier University.

School kept him grounded. “School was my reality check, showing me there were other things going on in the world.”

Coull also went to university, in Guelph, which was a challenge, because she was on the ice even longer than Rowsom, skating singles and pairs.

While Coull came from Montreal, Rowsom grew up in the country between Tillbury and Comber in southern Ontario’s Essex County. He started skating about 1972 after watching skating on TV. He put on a pair of skates and went down to the creek behind the house to practice, teaching himself to do a waltz jump. Eventually he tried out with Leitch in Preston, travelling back and forth by train at first before moving to the Preston arena about 1974.

Coull, half a dozen years younger, was a talented pairs and singles skater, while Rowsom was regarded as a brilliant and intelligent technical skater. Under coach Leitch, they flourished.

Nine months after coming together they won silver at the 1984 Skate Canada International. They then competed at the World Championships in Helsinki.

The 1987 championships were remarkable for the Preston club. In addition to Coull and Rowsom taking the senior pairs title, Preston teammates took second and third. Denise Benning and Lyndon Johnson were second and Christine Hough and Doug Ladret won bronze.

But it was unmistakably Coull and Rowsom’s time, though their time together would soon come to an end.

Still, from 1980 to ’84 the pair finished no lower than third at the Canadian Championships, before winning three straight gold medals.

In those years they were at their pinnacle. At the World Figure Skating Championships, they placed ninth, seventh, seventh, third, and sixth in consecutive years between 1983 and ’86.

At Skate Canada International, in addition to their second-place finish in 1984, they won gold in ’86, defeating Ekaterina Gordeeva and Sergei Grinkov, the much-lauded Russian duo. Gordeeva and Grinkov enter the discussion when talk turns to the greatest-ever figure skating pairs.

Rowsom credits Coull with making things work properly. “I was more interested in making up new things and experimenting, and she was the one, once we decided what we wanted to do, to make sure the details would work out perfectly and consistently. We were both interested in keeping the program fresh by making little changes here and there. Doing the same thing for an entire year with no changes can get a bit dull.”

Together they innovative, and that was exciting. “When we went to the big competitions, people were wondering what we were going to do. We would normally do something that no one had ever seen before.”

In 1985, Coull became the first Canadian athlete in 34 years to skate both pairs and singles at an international competition. Rowsom suffered a serious groin injury about that time. “We weren’t able to skate together very much because I was laid up,” recalls Rowsom. “We did skate in ’86, when we finished third, but we weren’t doing triple jumps anymore because I couldn’t jump off my left leg. I had an operation after Worlds in ’87, and the healing process was taking quite a long time. By the end of the summer we were going to be so far behind that we decided it would be a good time to retire rather than have a bad year. We’d already gone through two years of trying to work around my injury, and it was becoming more and more limiting. There were lots of things I couldn’t do. It was a shame because Cynthia had always wanted to go to the Olympics and because of my injury, she wasn’t able to go.”

Five times they placed in the top ten at international competitions, but their best finish was the bronze medal at the 1986 Worlds.

In 2011 they were inducted into the Skate Canada Hall of Fame.

They had performed admirably on both the Canadian and world stage after becoming a pair team in June of 1982; they won the silver at the Senior National Championships not long after,  and went on to win three senior National Pair Championships, the Gold Medal at Skate Canada 1983 and won the bronze medal at the 1986 Worlds in Geneva Switzerland.

After their competitive days were over Rowsom coached and then took part in the Champions on Ice tour for a time, before moving to Stratford where he opened a music store.while Coull skated professionally for a decade. Together, the highlights were many, but “it’s funny,” says Rowsom. “The performances where we skated really well, I can hardly remember them, but can remember the disastrous things. A lot of the most memorable things for me were watching other people. Being in the arena when Barbie Underhill and Paul Martini won the World Championships in Ottawa — that’s one of the most memorable things for me, of my whole skating career. Or watching Torvill and Dean, at the same competition. Or skating with and just being on the same ice with Gordeeva and Grinkov. Those are things that I remember more than my own performances.”

But the other memorable thing that got Rowsom and Coull enthused back in those days was simply seeing their coach happy. “When Mr. Leitch was pleased, that was heartwarming too.”

“Cynthia and Mark were the best individual technical skaters we ever coached as a Pair team,” said coach Leitch. It was high praise, considering the many Olympians he coached.

Coull skated in shows all over the world for nearly a decade after they finished skating together.

Rowsom, who still listens to music at every available opportunity and sings at church, lives in Waterloo, while Coull lives in Boston.