With a lifetime of involvement in the Ontario Rural Softball Association, Reidsville resident Earl Sage follows in the footsteps of Lorne Johannes as a builder in the rural sports scene.

Sage was treasurer for 25 years of the rural softball league, when the league was in its infancy. It’s something he thoroughly enjoyed.

Earl grew up on his family’s farm, located on Whistle Bear Road. His father, Lorne, an avid runner in his day, encouraged him to get involved in sport.

Lorne had competed at country fairs and field days, often returning home with prizes. He even once competed against the famed Indian runner Tom Longboat.

Coming from a family of 11 children – Earl was one of nine boys – he did his part to pitch in with chores. And despite losing a brother to whooping cough, and another, at age 19, to appendicitis, there were always enough Sage boys to form a ball club.

Earl played his first game of organized rural softball in 1937 at the age of 14, just a few years after Blair resident Lorne Johannes and his friend Dr. J.C. Seaton had estab- lished the ORSA in 1931.

That was the start of what would become an almost lifelong affiliation with the ORSA. Earl played centrefield and first base for the Dickie Settlement team. He attended the school before taking his Grade 9 at Blair.

In the early days there were no uniforms or spiked shoes. Several playing fields were actually cow pastures; players had to look carefully before they ran.

There were no lights for night games. Sage recalled one game where the umpire, from the visiting team, refused to call the end of the game until it got so dark that no one could see the ball. 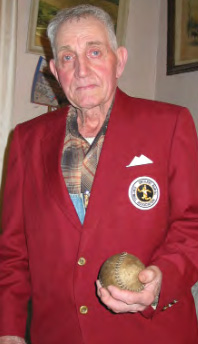 He played home games in the school yard at Dickie Settlement School, and prepared the ball field by cutting the grass and marking the diamond. He made a backstop from chicken wire on cedar posts, which he prepared on his farm. Players’ benches and a pitcher’s box were made from scratch, and the bases were grain-filled jute bags, half-filled with sawdust.

Sage continued playing until 1953, stopping when his father became ill so he could take over operation of the farm. The next year he was invited to become secretary-treasurer of the association, but declined the secretary’s position because he felt he couldn’t speak in public very well. He did decide to take on the treasurer’s duties however.

He couldn’t attend the 1954 annual ORSA meeting at Galt’s Iroquois Hotel because he had to sow oats that day, but he subsequently learned he had been elected to the treasurer’s post.That year there were only 14 teams, so Earl suggested they place an ad in the Co-op paper to recruit more teams. The campaign was successful and the Association expanded to more than 400 teams; Sage’s workload increased dramatically.

In the 1970s the Association’s savings were nearly wiped out when they were taken to court by a girl who wanted to play on a boys’ team. During the four-year battle the issue kept moving up the judicial system, going all the way to the Supreme Court.

During his years with the ORSA Earl met many interesting people and through it all, the Association was always on his mind. In 1983 he was presented with a special award by the province of Ontario and signed by Premier Bill Davis.