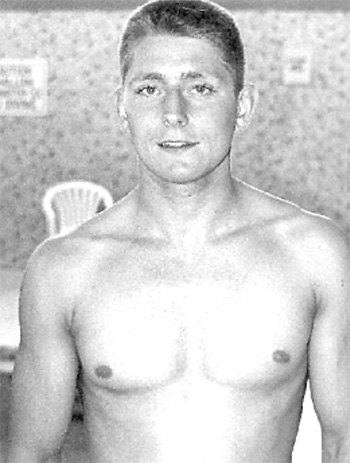 Called “the greatest marathon swimmer of all time,” by Australian coach Laurie Laurenson, Cambridge’s Greg Streppel made a strong case for himself by winning the world marathon swimming championship in 1994 at Rome, Italy.

A year later he was recognized in his home town by being presented with the Tim Turow Cambridge athlete of the year award.

Streppel, now a pharmacist living in British Columbia, was the Canadian marathon champion from 1990 to 1995. It is a mark of his prowess in the world of distance swimming that no one from Canada ever beat him in a long distance race.

In 1993 and again in 1995 he was the Pan-Pacific mara- thon champion, winning the former in Rome, and the latter at Lake Lanier, Georgia. “Tough as nails,” was how one coach described him.

Through his distinguished swimming career he won 11 World Cup marathon races in countries like Argentina, Mexico, and Italy.

But Streppel was versatile, too, excelling in the shorter pool events. In 1992, for example, he was fifth in the 1500 metres at the Olympic trials in Montreal, and four years earlier he placed fourth in the 400IM at the Olympic trials, finishing just behind another future Cambridge athlete of the year and 1992 Barcelona Olympian Ray Brown.

That year Streppel, swimming in an Olympic B meet, was victorious, clocking a faster time than those who made it to Seoul.

His career was also distinguished by more than 20 med- als at the CIAU championships over a five-year career at the University of Victoria. Streppel began swimming with the Cambridge Aquajets at the age of 10, quickly winning five provincial titles. He made it to his first Summer Nationals at the age of 15 and was the youngest competitor in the race.

Between 1988 and 1995 he was a member of the national team, excelling in both the pool and marathon events.

Streppel also competed at the World University Games in 1988 at Sarajevo, finishing sixth in the 1500-metre freestyle.

He graduated from UBC with a degree in pharmacy in 1996 and eventually returned to Cambridge where he is a pharmacist.