Jamie McGrigor and Kathy Hutchinson were home grown figure skaters who peaked in the early 1970s with the Preston Figure Skating Club (PFSC) under the tutelage of coach Kerry Leitch.

Hutchinson, 5′ 2″ and 108 lbs., was born in Paris, Ontario and moved to Preston when she was five years old. She began skating at age 10 after seeing the Sugar and Spice on Ice show by the PFSC.

“I’ve got to do that Mom,” she declared. “I can still remember Mr. and Mrs. Leitch picking me up to go skating and watching the Preston Memorial Arena burn down. I thought, ‘Where are we going to go skating now?’ It was just terrible to see that.”

They made the ice pad into an outdoor rink for several years before the new Preston Aud was built across the street and the Karl Homuth Arena was erected where the fire had been.

That same year, 1971, just three years after she took up the sport, she skated in her first Canadian championship, in Vancouver, skating both singles and pairs. She finished 7th as a Novice in those first Canadians, and then moved up to 4th the next year. At 15, she decided to skate exclusively pairs with partner Jamie McGrigor, who was three years older than she was. That year, 1973, they finished first at the Junior Canadians. “Jamie was a great partner,” she said.

They moved up to the Senior ranks the next year and were third at the Canadians, and 18th at the Worlds. That year they placed first at Oberstdorf, Germany to win the Nebelhorn Trophy, and were first again at the VIII Grand Prix International at St. Gervais, France. “It was a great experience. Some of the arenas had no sides, only roofs. It was lovely. I hoped to go back again.” But it was not to be. “My dreams of going to the Olympics were shattered.”

In 1975, after finishing second at the Canadians, Hutchinson suffered a devastating injury during training when McGrigor tripped during a lift and Hutchinson landed hard on her knee. A year earlier, in 1974, she had continued her routine with McGrigor and skated through a terrible injury in which the back of her skate impaled her other foot, but this last injury was impossible to skate through. She had shattered her kneecap. Soon, with Hutchinson in Toronto undergoing surgery with the same surgeon who had operated on Bobby Orr, and not expected to skate again, McGrigor was given a new partner. For Hutchinson, it spelled the end of her international competitive career. She eventually began to coach in Manitoba – McGrigor began coaching not long afterward. Today she still lives in Cambridge. 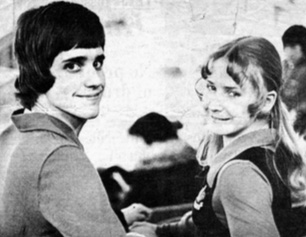