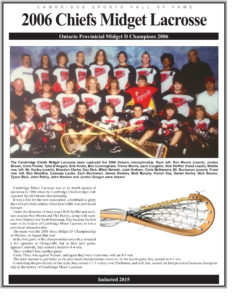 Cambridge Minor Lacrosse was in its fourth season of operation in 1986 when the Cambridge Chiefs midget club captured the all-Ontario championship.

It was a first for the new association, a hark back to glory days of a previous century when local clubs won provincial honours.

Under the direction of head coach Rob Steffler and assistant coaches Ron Morris and Phil Hurley, along with trainers John Slattery and Scott Buchanan, they became the first team in the history of Cambridge Minor Lacrosse to win a provincial championship.

The team won the 2006 Boys Midget D’ Championship in Mimico, in August that year.

In the first game of the championship series they dropped a 4-3 squeaker to Orangeville, but in their next game, against Cornwall, they scored a decisive 8-4 win.

They wouldn’t lose another game.

Game Three was against Nepean, and again they were victorious, with an 8-5 win.

The team seemed to get better as the provincial championships wore on. In the fourth game they scored an 8-1 win.

Concluding the provincials in fine style, they scored a 7-3 victory over Shelburne, and with that, earned the first provincial lacrosse championship in the history of Cambridge Minor Lacrosse.