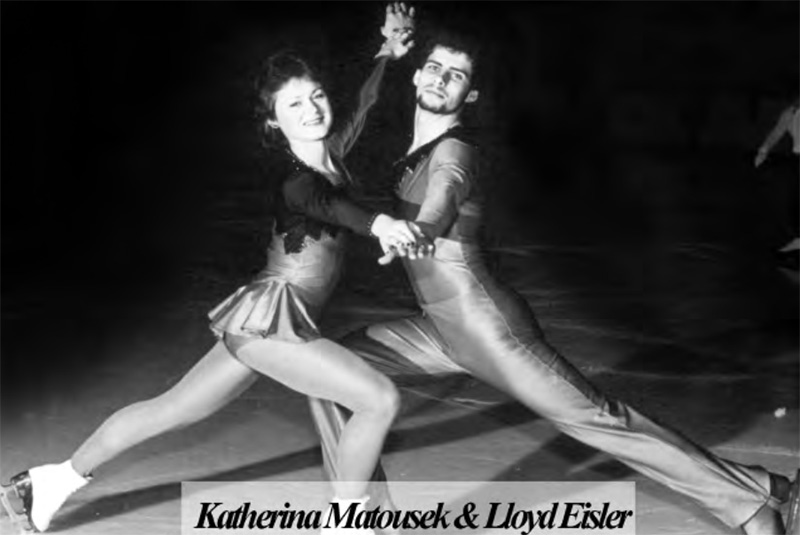 Katerina Matousek, a native of Vancouver and member of the North Shore Winter Club, and Lloyd Eisler, a native of Seaforth, Ontario, joined forces in 1982 under coach Kerry Leitch with the Preston Figure Skating Club, and by 1983 the two were vying for national honours.

That year they were third at the Canadian championships, and the following year, they were crowned national pairs champions.

They had many top finishes internationally, but unquestionably, they reached their pinnacle in March of 1985 at the World Figure Skating Championships in Tokyo when they won the bronze medal.

Eisler, nicknamed Herbie, was known for his throwing prowess, and the two skaters were among the world’s best.

Internationally, they had a string of successes, including finishing second at St. Gervais, and the Nebelhorn Trophy in 1982 – they were sixth at Skate America that same year – and 10th at the 1983 World Championships.

Also in 1983 they were third at the Ennia Challenge Cup and fifth at Skate America.

In 1984 they were eighth at the 1984 Winter Olympics, and went on to place fifth at the World Championships. That same year they were third at Skate Canada and fifth at the NHK Trophy.

They were also named Cambridge’s Tim Turow athletes of the year in 1984 and 1985.

Matousek, who had been plagued with painful leg injuries – she had stress fractures in her final two seasons of skating – retired from competitive skating in May, 1985 following the World Championships, deciding to turn to coaching in her native British Columbia.

She and Eisler had been unable to defend their Canadian title at the Canadian championships that spring in Moncton. Lloyd went on to skate with Isabelle Brasseur – Brasseur and Eisler were household names in Canada in the late 1980s and early 1990s – five times winning the Canadian pairs title.

Eisler and Brasseur went on to win the World Championships in 1993, after finishing second the two previous years.

Though Matousek and Eisler skated only a few years together, they had achieved a distinction that few ever attain – winning a world championship medal.

Eisler would go on to have greater success with partner Isabelle Brasseur, whom he partnered with in 1987. They won five Canadian pairs titles.

The pair also skated to bronze medals in both the 1992 and 1994 Olympic Winter Games and were the 1993 World Champions.

Brasseur and Eisler teamed up with Lou-Anne Brosseau (Hunt) in 1992 and formed B.B.E. Productions Inc., and together the group planned and organized professional figure skating events across Canada.

Their primary goal was to raise awareness and funds for the Children’s Wish Foundation of Canada who named the pair National Spokespersons in September 1992.

B.B.E. Productions Inc. won several awards, producing more than 25 shows and raising more than $250,000.00 in awareness and sponsorship for the charity. In their years of operation (1992–2003), B.B.E. also granted several wishes to children suffering from life-threatening illnesses.

He appeared in the 2006 FOX television program Skating with Celebrities in which he was partnered with actress Kristy Swanson, whom he later married.

Eisler is a member of the Canadian Sports Hall of Fame.