At the time of his induction into the Cambridge Sports Hall of Fame, Preston native Paul Ross was in his 79th year and still actively playing hockey. 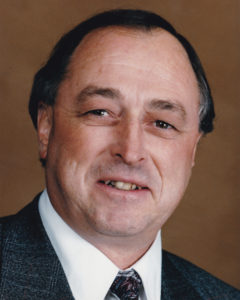 That about sums up the sport that has been his lifelong passion.

During those nearly eight decades Paul has played a pivotal role in the sporting life of Cambridge from his earliest days, first as an avid sports enthusiast, and later, as an administrator and member of several sports organizations, including the Cambridge Sports Hall of Fame.

Ross served as president of the Hespeler Minor Hockey Association in the 1990s, and was heavily involved in planning the twin ice pad at Hespeler Memorial Arena.

Born into a family of hockey players, his grandfather was the late Fred George who played with brothers Walter and Punch on the 1920-21 AAA Intermediate Ontario champions. Later, his father played with his brothers John and Hugh on the famous Blair Hornets hockey team.

For the 22 years leading up to his induction, Ross was involved with the Sports Hall, spending countless hours in various capacities with the organization, almost from its inception.

During that time, which has extended into his retirement, he has continued with another of his lifelong interests — playing hockey. Not surprisingly, hockey and the Toronto Maple Leafs were his passions in life while growing up in Preston.

Owing to the fabled Preston Arena on Lowther Street having been condemned, from the age of 12 Ross played Peewee hockey at the Hespeler Memorial Arena until the new Preston Arena was built. There, his association with equipment manager Dunc Pollock began. Before each game he would assist Pollock in retrieving sweaters and goaltender equipment from the storage lockers. Then he would suit up for the game, and afterwards, re-fold the sweaters from both teams, collect the goaltender equipment, and return them to the storage lockers.

It formed the basis of a lifelong association with Pollock; it was Pollock who convinced Paul at 18 to join the Preston Boys Hockey Association (PBHA) executive as Treasurer. He was on the executive when the OMHA sanctioned Novice and Atom divisions, allowing Novice-aged boys to play organized hockey.

In 1958, an idea was spawned by some ambitious Preston parents to host a hockey tournament for Novices. After a heated discussion amongst the executives, the tournament was approved. It was to be run by volunteer referees, scorekeepers, and timekeepers. Paul mustered good friend Ed Burr, brother Peter, and other Preston friends as volunteers. The eight-team event was a roaring success and continues to this day,  62 years (as of 2020, and counting) later. He spent 10 years with the PBHA holding various executive positions as well as coaching, managing, and as a trainer.

In 1960, he became secretary of the Preston Pal Jr. C hockey club, where he spent four years organizing various fundraising stags, elimination draws and other functions.

The Preston Pal Jr. C hockey club changed its name to Preston Raiders Jr. B team; he spent five years with the Raiders as secretary, fundraising chairman, Saturday Night Blueline Club organizer, and in sponsorship recruitment and program advertising recruitment. He also announced home games, did timekeeping, scorekeeping, and transported players to and from their homes in Kitchener and Galt.

In 1964-65 Ross managed the PBHA Bantam All-stars with coach Bob Betke and trainer Wally McKay. At that time Quebec was advocating separation from Canada and Betke had discussed  the idea with his business counterpart from St. Vincent De Paul, Quebec, of hosting an exchange hockey series to help sway the Quebecer thinking. After several fundraising endeavours, Paul organized the bus trip to Quebec. Preston Bantam players were billeted to St. Vincent De Paul player homes where Canadian French was the principal language. This did not deter the players from enjoying the Quebec hospitality and hockey sportsmanship.

Maurice “Rocket’ Richard attended the exhibition hockey game and met with the Preston players after the game. A month later the St. Vincent De Paul players travelled to Preston where they enjoyed similar hospitality and good sportsmanship. That year the PBHA Bantam All-stars advanced to the All Ontario semi-finals but lost to Leamington 3 games to 2.

In 1967-68, he and Ron Bowman coached the PBHA Juveniles in the Hub League. In 1964-65, along with the late Tom Watkins Sr., he co-founded the Ontario Rural Hockey Association Preston Jester hockey team. In 1968, they won the All-Ontario Rural Hockey Association Intermediate and Senior titles, ousting Intermediate champions Port Dover and the Senior team from Wallaceburg, respectively.

In 1977-78, Paul and the late Jeff Lillie co-founded the Hespeler Oldtimer hockey team that exists to this day. In 1980, he organized a special fundraising event with the NHL Oldtimers that saw the Hespeler Memorial Arena fill to capacity, followed by a reception with Norm Ullman,  Davey Keon  and Andy Bathgate. Also that year he and a number of other Hespeler Oldtimer players organized the Annual Hespeler Oldtimer Hockey Tournament with teams from all over Ontario.

As secretary for the Hespeler Minor Softball Association he organized the Santa Claus Parade float, and served as T-Ball convenor.

In 1978, he coached his son in the Mite House League and began a 25-year involvement with the Hespeler Minor Hockey Association. In 1980-81 he was House League Convenor overseeing Novice, Atom, Peewee, Bantam, Midget, and Juvenile divisions.

In the early years he served as Secretary, Treasurer, Registrar, Ice Council Representative, Ice Time Convenor, Awards Banquet Chairman, and chairman of the travel coach selection committee. In 1988 he became President, where he served for four years. He also worked with the Hespeler Minor Hockey Olympics as an announcer, timekeeper, and scorekeeper. He was involved with the proposed amalgamation of the Preston, Hespeler, and Galt minor hockey groups. Following a closed vote meeting with Hespeler Minor Hockey parents, it was adamantly decided that Hespeler did not want to amalgamate but if any Hespeler player wanted to participate in triple A, they would be allowed to do so.

During his tenure, the Hespeler Memorial Arena was condemned and had to be replaced. Along with Brian Flannigan and Ron Schindler from Preston, he organized a Preston/Hespeler interlocking house league with teams from each centre enjoying non-contact competition. Paul, Brian, and Ron also organized a successful Juvenile interlocking house league with Galt Minor Hockey.

As President he negotiated future NHLer and Hall of Famer Kirk Maltby’s waivers to both the Cambridge Winterhawks Jr. B and Owen Sound Plater Jr. A teams. In 1993, he became a Life Member.

In 1988 he co-chaired the Hespeler Memorial Arena Twin pad committee, appearing before city council to promote the benefits of a twin pad arrangement.

In 1998, he and the late Ross McKellar organized the GPH (Galt, Preston, Hespeler) Oldtimer Hockey Club that exists to this day. At age 78, he continues to play on the team.

After joining the Cambridge Sports Hall of Fame committee in 1996, he worked with Morguard to design the current displays at the Cambridge Centre. He served as secretary/treasurer for six years, Induction Ceremony chairman for a decade and was a key member on various sub-committees. In 2005-06 at age 65, he was an instructor with Al Findlay’s Galt Minor Hockey School.

In 2012 he was a key participant in arranging the Preston Novice Hockey Tournament to be affiliated with HMHA and OMHA.

His community involvement included Galt Kinsmen in 1965 where he served as secretary for four years. He was involved with fundraising for Churchill Park Arena, Soper Park swimming pool, Peace Haven Boy Scout Camp, and helped with the successful Centennial Calypso 67 project. 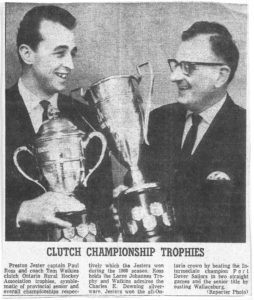