At Preston High School Scott Thorman was known as a gifted athlete as was one of his good friends, Nathan Brannen. Both made it to OFSAA: Brannen in distance events, and Thorman in the javelin.

Thorman would go on to play baseball in the Major Leagues for the Atlanta Braves, while Brannen would become a three-time Olympian in the 1500 metres.

At PHS he came under the tutelage of coach Mike Kilpatrick. “He really had a big impact on me,” said Thorman, who excelled in many sports. But baseball was his calling.

In the early years he was an outstanding pitcher, though his preferred position was third base, but he also stood out at the plate. Indeed, even as a youngster he was hitting long balls that people still talk about. He remembers seeing the “big” diamond, with real dugouts,” at Waterworks Park, and can recall hitting the ball over the fence there. Then he began to hit a few more home runs, “and that gave me some confidence. It felt really natural for me. And I was really fortunate to have the support of my family too. My Grandma was a snowbird and went to Dunedin, so we used to go down during spring training. We’d drive down as a family and stay at my Grandma’s for March Break and just watch baseball. And it wasn’t just major league ball. I’d ride the bike over to the minor league park and watch baeball all day. and now I get paid to do it.”

The Honda Hit, Run and Throw competition was also a big deal for Thorman when he was eight or nine. “I was fortunate enough to make it to the finals of the comeptition in the SkyDome (Rogers Centre), back when it was the SkyDome, and I think I won that at an early age, so that gave me some confidence as well.”

The son of Rob and Carol Thorman, his father’s unexpected death from cancer when he was 12 hit hard.

“He coached, but it wasn’t just sports. It was riding bikes and just doing father-son stuff, but baseball was something I started to get more interested in and it was kind of a natural progression,” said Thorman, who looks back fondly on his days with the Cambridge Tyke Cubs.

Major League scouts had him in their sights from an early age. When he was selected by the Atlanta Braves as a third baseman in the first round of the Major League Baseball Draft — he was the 30th player drafted overall — his professional career was off and running. Only 18, at that time, he was the highest draft ever from Canada.

He left PHS on a high, signing a standard minor league deal that was capped with the highest signing bonus given to a Canadian at the time, $1.225 million US.

Reporting to the Gulf Coast League Braves, he finished the season there, having played in 29 games and hitting .227, with one home run and 19 RBI. 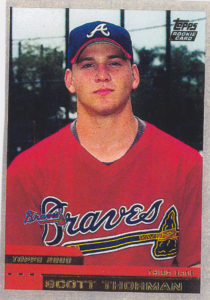 A shoulder injury — he dislocated his left shoulder a month before he was drafted, but played through it — and subsequent surgery by a top surgeon in Birmingham, Alabama, forced him to sit out the 2000 season.

But it was only a temporary setback as he started to climb up through the Braves system. In 2006 Thorman finally made it to the big leagues with the Braves, thanks, he says to “timing and opportunity.” He made his debut on June 18, 2006, Father’s Day, and the significance was not lost on Thorman or his family. “Family means everything to me,” he said. It was a fitting day to finally realize his dream of playing in the majors. His entire family was there, as were thoughts of his father. Their constant support had made it all possible. He was playing left field for the first time in his life. Two days later he got his first major league hit, an RBI single, against Scott Downs of the Toronto Blue Jays.

His debut was memorable as it came on a Sunday in ESPN’s Game of the Week against Boston. Coming up from Richmond, it was a huge stage. Curt Schilling was pitching for the Red Sox. “Kelly and I drove from Richmond to Atlanta, got a hotel, and I went to the park the next day and it was just so surreal. I don’t even think I felt my legs the entire game. And on top of that, I was playing left field and hitting third and I had only played two or three games in left field my entire life, but that’s where the opprotunity was for me.”

There was so much to look at, so much to take in. In later years he would remember how that feeling goes against everything he would try to teach his young players, to “focus on the baseball becasue the baseball is always the same. The pitcher is always 60 feet, six inches; the bases are still 90 feet. But when it’s your first game, everything goes kind of fast.”

All told, he played in 24 games that season, hitting .234 with five home runs and 14 RBI. It was a dream come true for the boy from Preston.

The Braves were high on Thorman. The next season, the Braves traded first baseman Adam LaRoche to Pittsburgh to make room for him at first base. It would only be years later, near the end of his career, when he came full circle and ended up playing third base once in a while.

Thorman earned his first multi-home run game on May 12, 2007 in a 9–2 win over the Pittsburgh Pirates. On September 22, he hit a pinch-hit game-tying homer with two outs in the bottom of the 10th inning against the Milwaukee Brewers. The Braves went on to win the game an inning later.

Appearing in 120 games for the Braves in his second season, he hit .216, though he did manage 11 home runs and 36 RBI. At the trade deadline the Braves acquired Mark Teixeira, which significantly reduced Thorman’s playing time. At season’s end he was taken off their 40-man roster and sent to triple-A Richmond.

He became a free agent at the end of the season but also had the chance to play for Team Canada at the Beijing Olympics in 2008. “Being able to represent your country – there’s nothing like it. And even more cool was that I got to hang out with one of my best friends, Nathan, for two weeks in China. We grew up together,” recalls Thorman. “We met up at William G. Davis, and then went through high school together.” Thorman graduated in 2000; Brannen continued for his OAC year.

“We’re still very good friends, and he comes by every year over the holidays when he comes home.” After a spectacular career, Brannen announced his retirement in late March, 2018.

In the off-season Thorman would often help out at the Galt Minor Hockey School. “Al (Findlay) got me involved in that, and I didn’t help out as much as I would have liked, but being around those young kids and helping out, I think you learn as much from coaching as you do from playing sometimes. Even though hockey wasn’t my main sport, stuff I learned there I’ve ended up teaching to my nephews and my own kids when learning to skate. It is an unbelievable program and was very rewarding to be able to help out.”

After the Braves, Thorman signed with the Milwaukee Brewers, but finished the 2009 season in Omaha, Kansas City Royals AAA affiliate, where he had a strong year, hitting .297 with 19 home runs and 63 RBIs in 97 games with the Triple-A Omaha Royals. After two seasons with Omaha he was signed by the Detroit Tiger organization. He still loved the game and wasn’t ready to give it up.

He returned home and gave local fans a treat when, after a short-lived stint in Mexico, he played in the Intercounty Baseball League with the Brantford Red Sox. He helped the Red Sox win the Intercounty title before calling it quits on a 13-year professional career.

“With a young family it’s time to move on and pursue other ventures,” he said at the time. “There’s no regrets. I make every decision I’ve made in my baseball career for my family. I feel very fortunate to have been able to play baseball for 13 years …I had a lot of great opportunities.”

He was at peace with his career, he said. It might not all have gone the way he would have scripted it, but it was an impressive career.

“A lot of things are out of your control, but that’s life. I feel very lucky because not many people get to do what I did as a career and it was a lot of fun.”

The father of three children, his experience playing professional ball proved invaluable for a second career in coaching, south of the border, which he has enjoyed since his playing days ended.

“The numbers are staggering,” he says of the chance for a young player to reach the Majors. “So I feel very fortunate to have had things go my way and am thankful to the Braves for selecting me, believing in me and giving me the opportunity to play.”

In 2017 he was promoted to manager of the Kansas City Royals’ minor-league baseball team in Lexington, and in 2018 he was back for a second year as manager of the Lexington Legends in Kentucky.

“We are thrilled to have Scott back for another season as the Legends manager,” said Legends President and CEO Andy Shea. “Scott’s tremendous leadership will be an asset to have back in the Legends dugout as he did a phenomenal job with our team last year. He and his coaching staff relate very well with the players, our fans and this community, and we look forward to what they can do on the field in 2018.”

“I’ve got a rockstar for a wife,” he said of Kelly, whose support allows him to continue his involvement with the sport he loves.

His advice to young ballplayers: “Do your best every day.”

Thorman and his family live in Kitchener in the off-season.