When people talk about local contributors to sport, Stan Blain ranks with the best of them. And although his involvement spans a couple of sports, it is in softball that he has made his mark. Blain began his involvement in 1937 when he coached the St. Andrew’s Church junior softball team, a post he continued for three seasons.

In 1942 he coached the Galt junior softball team that represented the city in the Ontario Softball Association Championships. Galt was eventually defeated by Brantford. In 1947 and 1948 he coached the Dickson Public School hockey and baseball teams, but even more impressive was his longevity with the Galt Boys Hockey – later the Galt, and then Cambridge, Minor Hockey – Association, where he served as coach, manager and on the executive at various times from 1946 to 1979. 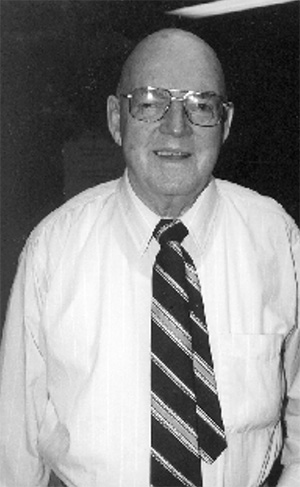 He was secretary of the Galt, now Cambridge, Minor Softball Association for many years beginning in 1966, and from 1990 to 1997 he served as umpire for the Sheffield team in the Flamborough Oldtimers Softball League.

From 1982 to 1987 Blain was secretary of the Intercounty Softball Association.

He was also a dedicated volunteer-judge at the public school skating races at Galt Arena Gardens over several years.

Blain, who always had a keen sense of local history, had a demeanour that was friendly and open to others.

He was recognized for his long involvement in the sporting life of our community with special recognition as the Don and Benita Rope Cambridge Sports Contributor in 1985.

In later years, nearly blind, and confined to a wheelchair, he attended the annual CSHF induction ceremony.