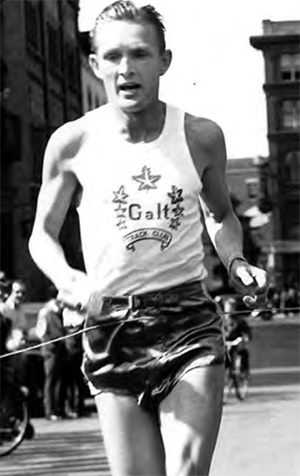 Galt’s Ab Morton raced with, and often beat, the greatest distance runners of his day. A member of the Galt Track Club and a good friend and training partner of the famed Scotty Rankine, he reached his peak in the mid-1940s.

One year Morton was runnerup for the Canadian athlete of the year award – the Norton H. Crowe Award.

The highlight of his career came in 1947 when he won the Canadian marathon championship, beating Rankine and Quebec’s Gerard Cote. He won two of three Olympic marathon qualifiers that year but was inexplicably denied a spot on the Canadian Olympic team. Instead, he was forced to attempt to qualify for the team in the 10,000 metres on short notice, by going to Montreal just one day before the Olympic team was sched- uled to depart for London. Having run at the marathon trials just two weeks earlier, Morton went to Montreal and finished second.

So ended his Olympic dream. “It was heartbreaking,” he said. “I just lost interest in running after that. It took all the wind out of my sails.” Morton retired from competitive run- ning.

One of the marathon- ers who had been named to the team was the famed Cote, four-time winner of the Boston Marathon. Morton had beaten Cote that year, as he had done at other times, including the 1943 Around the Bay 19-miler in Hamilton. He also recorded two seconds – Cote edged him by yards in 1942 – and a third in Hamilton.

He had many other successes over his running career including twice finish- ing fifth at Boston. He was also a member of a couple of championship teams at the prestigious Berwick Run for the Diamonds in Pennsylvania. Morton and Rankine led a Galt T.C. team that won the team title three years in a row.

He captured the International Championship in Quebec in 1946, beating hometown favourite Cote. Morton held his own against all the top names in the running world during his career, battling Cote, Boston’s fabled Johnny Kelley, Walter Fedorick, Korea’s Yung Bok Su, and Greek champion Stylianos Kyriakides.

Morton and his wife Gladys were staunch supporters of the Cambridge Sports Hall of Fame, and even as late as 2009, Morton gave a talk to a group of local runners, describing his running career and training methods.

There was no doubt he was one of the best in the world, but always the question will be asked: “Why did Canada’s best marathoner in that Olympic year of 1948 not get a chance to compete at the Olympics?

The answer will forever remain a mystery.