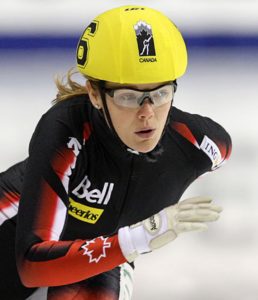 As the younger sister of Kevin (Crockett) and Cindy Overland, Amanda Overland literally grew up on long blades with the Cambridge Speed Skating Club. And while her older siblings eventually moved exclusively into long track, Amanda, though dabbling with long track like most of her clubmates when they had an opportunity, stuck with short track.

Both Kevin and Cindy preceded her into the Cambridge Sports Hall of Fame. And her father, Ernie, was inducted into the Canadian Speed Skating Hall of Fame in 2016.

All three siblings would eventually leave the Cambridge club, and their home in Kitchener, to pursue their sport, living and training at Calgary’s National Training Cent 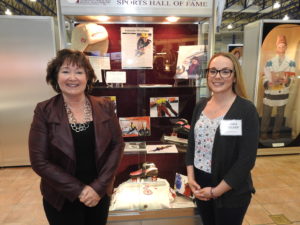 re based at the Olympic Oval. Each, in turn, would go on to compete at the highest levels of the sport, skating for Canada at the World Championships and at the Olympic Games. They remain one of the most successful families in Canadian speed skating history.

In their early years one of the common denominators for the entire family was the early coaching of Tom Overend and Lisa Gannett. The two London coaches commuted from London to coach the young skaters. “They established the roadmap for the Cambridge club,” said Jasinskas.

Amanda, who began skating at age three or four, was among the youngest skaters at the club when the two coaches were shaping a bevy of local skaters into national-class athletes, but she benefitted from their influence, both directly and indirectly. Several of Amanda’s longtime coaches — especially her father Ernie and Vytas Jasinskas — were trained by Overend and Gannett, and they moulded Amanda into the skater she became. This coaching tandem, which coached together for almost two decades, was named Cambridge Sports Contributor several years ago.

Jasinskas, who’s known Amanda since she was about six years old, believes she could have excelled in long track had she chosen that option, because technically she was a very strong skater and had the desire to win.

“She liked short track,” said Jasinskas. “She liked the head-to-head competition.” The disappointments of short track — sometimes it’s akin to a crapshoot with the disqualifications, being taken out by other skaters through not fault of your own, or just having a bad day — skaters aren’t in control as much as they are in long track. “But that didn’t faze her. She was tough mentally. And, at some level, I think it appealed to her.”

Jasinskas saw her develop from a young skater into a force to be reckoned with as he watched her literally grow up on skates.

Fortunately, she had all three.

The Cambridge club has long been regarded as one of the top clubs in the country, with a long succession of successful skaters. “We’ve been lucky that way,” said Jasinskas. And though Amanda may have felt some pressure to excel like her older siblings, she eventually developed that burning internal desire to succeed.