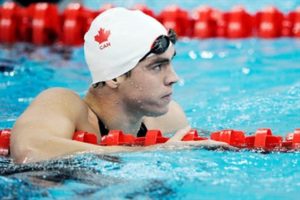 Hurd, whose father swam competitively for Queens University, got his start in the sport as an eight-year-old. Following graduation from Oakville Trafalgar high school, he attended the University of Michigan in Ann Arbor where he studied engineering.

When he was just 18 years old he competed in his first Olympics, the 2000 Sydney Games in Australia, swimming in the men’s 1,500 metre freestyle, finishing 23rd. He also won a gold medal on the World Cup circuit in 2000 in Edmonton, Alberta in the 1500-metre freestyle event.

Though he was in chlorinated pools most of his early years, Hurd realized something was wrong when he 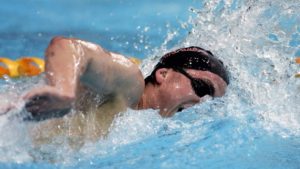 seemed to be chronically suffering from fatigue during and after training sessions. It was eventually discovered he was allergic to chlorine, among other household items.

In the 2004 Olympics in Athens, Greece, he was at or near the top of his game, representing Canada in four different swimming events. He made his best showing to date at an Olympics, finishing fifth in the freestyle relay 4x200m.

It was while he was in Athens, after his races, that he suffered a serious injury when he accidentally cut himself on glass, slicing an artery, tearing a ligament and damaging a nerve in his hand which required surgery and subsequent therapy.

Hurd was able to resume competitive swimming and competed in his third Olympics, the 2008 Games in Beijing, China, coming close to winning a medal when his 4x200m freestyle team came fifth, a repeat of his performance four years earlier in Athens.

Some of his best performances came at the Worlds, where he was a two-time World Championship medalist in the 4x200m freestyle relay (2005 silver, 2007 bronze).

He had the experience of competing against the best swimmer of his era, Michael Phelps, who was the most successful and most decorated Olympian of all time, with a total of 28 medals. Phelps, like Hurd, is also a University of Michigan alumnus (2004-2008) where the two were briefly teammates during Hurd’s senior year.

A standout on the world swimming scene and a three-time Olympian, Hurd enjoyed a long and remarkable career at the highest levels of his sport.