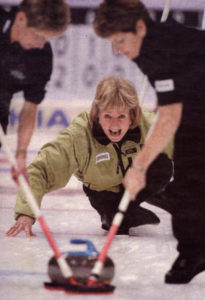 Anne Dunn is a curling fixture not only in her home town of Cambridge, Ontario, but across Canada and throughout the curling world.

Born in Toronto on May 27, 1947, Anne Vale was about 15 when her family came to Galt. Although the family had moved around due to her father’s work, when they arrived in Galt, they were here to stay.

”We all loved it in Galt,” she says. It was the early 1960s and the city of Galt still had that small-town feel.

She attended high school at Glenview and then GCI, where she graduated, playing every sport she possibly could. ”I loved them all — basketball, volleyball, badminton, track and field.”

She hadn’t yet been introduced to curling. It was only when she was out in the working world that the opportunity to curl first arose. ”I was working as a teller down at Waterloo Trust and Savings and Joan Gingrich was a member (of the Galt Country Club).”

It was 1967, Canada’s Centennial year. The club had installed year-round ice two years earlier. “She (Joan) spoke to myself and another friend of mine about joining, and I thought it would be a great way to get through the winter months if I liked it, and of course, I liked it right away.”

She’s always enjoyed team sports, and curling is a quintessential team sport. From that point on she curled out of the Galt Country Club, though she did see action at the old Galt Curling Club facility on Queen’s Square when there were special events held there. 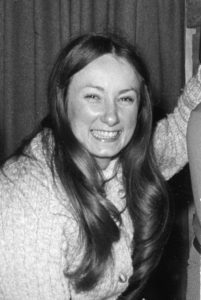 “It was a fabulous place,” she said of the old curling club, which was torn down to make way for the library expansion. “It had a lot of character — some great history. It had the most beautiful fireplace.” The fireplace was made of old curling stones, and when the new curling club was erected on Dunbar Road, that fireplace was salvaged and placed in the new building. “It was wonderful, even when the roof leaked.”

By 2017 Dunn had been curling for 50 years. Curling has changed since those first days when she was introduced to the sport. “There were no push brushes like we have now. And most people had a tuck delivery, which you see quite often amongst the Manitoba curlers. I also did that, but then I switched — I forget when it was — to a flat-foot delivery because the tuck was bothering my knees. It was probably the best thing I ever did, but the best invention is probably the push broom, for all curlers. It just keeps us in the game a lot longer, because the corn brooms were really hard on our hands. You would get blisters using those brooms.”

That change took place in the early 1980s. That and the flat-foot delivery has allowed Dunn to keep curling. She never envisioned curling would be a lifelong endeavour when she took it up, but the sport became a passion that surpasses even her love for golf.

A big part of the sport, for Dunn, as with most curlers, is the people. The camaraderie within the sport is legendary.

“In 1973 we played our first bonspiel and there were four of us that played together: Annelie Brewer, JoAnn Dolan and Karen Graham. I think we won it or came second and got very excited about that. And that year we also entered the Women’s Business playdowns and we ended up winning the provincial championship that year. It didn’t go any further than provincials but I think that’s when the fire started.” 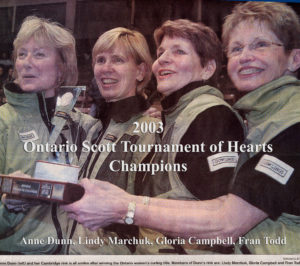 Her all-time highlights? “Winning the Ontario Seniors — I was over the moon at that. And then I was even more ecstatic when we won the Canadian championships that year. But I think when we won our first Canadian Senior title was the most exciting.”

In truth, every championship is special. And different. And something to be cherished with her teammates. Among her curling credentials are the World Seniors Curling Championship, as well as the Ontario Scott Tournament of Hearts title in 2003, beating  Anne Merklinger and Darcie Simpson in the playoffs.

That victory propelled the Dunn rink to the Scott Tournament of Hearts, which was a dream come true. Said Dunn at the time: “I would rate this year just as high as last year because o other Senior Ladies Curling Championship team from the previous year has gone on to compete at the Scott Tournament of Hearts the next year. However, winning he World Championships last year was unbelievable.”

Another of her personal highlights was beating Team Canada one year.

A big part of her success has been her positive attitude and team approach to the game.

Success doesn’t mean she is free of the pressures from high-level sport. Feeling nervous, or experiencing pressure before a bonspiel is only natural, she says. That’s just part of the sport, for everyone. The key is being able to control those feelings.

Although she has curled with, and against hundreds of people, her teams have remained remarkably consistent through the years. The first team she curled with stayed together until 1980. Then she stayed with her next team until 1986, and she then curled with Lindy Marchuk all the way through until Lindy moved away to Mexico.

The women she is playing with now have mostly been together since 2000. “So as far as the competitive aspect of it goes, we’re loyal to each other and we stay together.”

That loyalty, together with their talent, and a positive attitude, have been big factors in their success. “But we also have fun. We have a wonderful time together.”

Having fun is characteristic of the sport, and has been since Dunn began. It’s resulted in some great friendships over the years.

In her long curling career, there isn’t much, if anything, she hasn’t achieved. “It’s given me more than I ever expected.”

It’s also taken her across Canada and elsewhere in the world to places like Sweden and Glasgow, Scotland.

“Curling in Canada is really big because the people just support it so massively.” But the sport is growing in popularity around the world.

Yet she still admits to having the competitive fire within. “Nowadays, within the senior rank, we’re the real seniors,” she says. “We’re senior seniors now. We’re playing against the 50-year-olds and we call them the junior seniors.”

Although curling is a seasonal sport, as is her other great love, golf, there isn’t a point in the year when she isn’t thinking of curling. “I think of it all the time,” she admits. “I love golf in the summertime, but I’m always looking forward to when the curling season is going to begin. I’m not wishing the snow upon us but still looking forward to being part of it again.”

Dunn continued playing Can-Amera volleyball for many years, and has been actively involved in the Cambridge sports community with the Cambridge Sports Selection committee and the Cambridge Sports Hall of Fame. She’s also been on several committees such as the one that ran the senior ladies golf championship, and a year ago she chaired the Bantam Provincial Championships at the Galt Country Club.

“That was fun to work on something for the younger generation.”

She retired about five years ago from the working world, but she doesn’t have any plans to retire from her sports. Today she and her husband Bill — his late father Cecil Dunn is a Cambridge Sports Hall of Fame inductee — also enjoy going for walks.

The fire within might not burn quite as much as it once did for curling, but it’s still there.

More than a decade ago she and her teammates were called the Golden Girls of curling, since Lindy Marchuk, then 53, was the youngest on the team. Now, years later, Anne Dunn continues to lead her “Golden Girls” as each new season comes along.