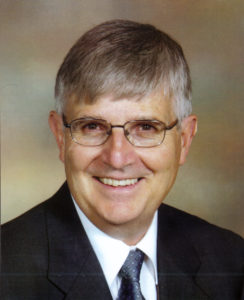 The summer of 1967 was memorable for the Centennial celebrations and projects that that took place across Canada, and for Expo 67 in Montreal, the world’s most successful World’s Fair.

But in fastball circles, there was something else that stood out the summer of ’67. It occurred on the night of June 27, during a game between the Galt Slees and the KW Forwell Super Vs.

The Inter-City fastball game began at 8 p.m., with Bob Eccles on the mound for Galt against a top-flight hurler and native of Toronto, Wes Martin.

It was an epic battle that didn’t end until 1 a.m. And when it did end, Eccles had outdueled Martin in what was likely the longest game in Canadian fastball history.

Eccles held the KW team scoreless through 26 innings, as the Slees got the winning run in the wee hours of the morning when Don Wisson crossed the plate.

Eccles, a right-hander, allowed just six singles while striking out 58. No KW runner reached third base the entire game.

But it was a team effort as his teammates played error-free defensive ball.

The game was epic. Both pitchers showed near flawless control in a contest that would become legendary.

Eccles was still playing in the late 1970s when he was named the most valuable pitcher at the OFL Invitational International Fastball Tournament in St. Catharines.

“…Eccles earned the respect of the six Ontario Fastball League (OFL) teams and various teams from the United States as he hurled Hamilton…to the title,” said the Hamilton Spectator. By then Eccles was a seasoned veteran. He was still turning heads as he got the win over Oshawa.

The legendary Dick Hames took the loss for Oshawa.

Eccles’ career was speckled with outstanding performances, often against some of the most highly-touted pitching opponents, such as his win against the Rostock midgets during the OASA Zone 1 finals. Eccles had a shutout, fanning 19 as his Slees won 2-0. At the plate he hit a home run and had a double, also connecting on a long fly ball that scored a run, while Earl Gooding, father of Jason Gooding, who was inducted into the Hall the same year as Eccles, doubled for the third Slee hit.

In what was vintage Eccles, the Galt hurler closed out the game, fanning the final eight batters he faced.

Eccles went on to lead the Slees to the All-Ontario midget title in Timmins, allowing just one run and three hits in 14 innings in 3-1 and 7-3 victories over the South Porcupine squad.

Eccles later played for Woodstock in the Ontario Fastball League, and pitched a no-hitter in a nine-inning game against the Kitchener Evergreens 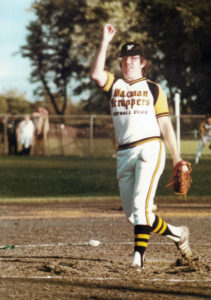 “I knew when I went to the OFL that I couldn’t go with the stuff I had,” said Eccles at the time. “I’ve been using my knuckleball and have been fortunate enough to get it over the plate. When they do hit it, it doesn’t go very far.”

He started playing at a young age. As the son of highly supportive parents Syl and Dorothy, he grew up on Spruce Street in Galt. “It was a wonderful place to grow up. I learned so much – we had Armenians, Germans and English, Scottish, Italians – and it was wonderful. My dad used to run the playgrounds in the summer, so of course, we had a lot of equipment stored in our attic, and we would go over to High Park and we’d set up our own rules.”

It was at High Park that he often practiced, pitching against the brick wall of old garage that backed onto the park.

When Eccles, who was born in Hamilton but raised in Galt, was nine, his good friend from nearby Oak Street, David Sheen, who eventually went to the University of New Hampshire on a hockey scholarship and then stayed there, told him about tryouts at Soper Park. His coach was Peter Kowalchuk, who was inducted into the Hall the same year as Eccles, and Bob Hadfield. The team was sponsored by Himes Clines sports store.

With Sheen he would practice the curveball, which eventually became the rise ball as they got older. In the summer of 1961 Eccles would gather every morning at Bill Doerfling’s backyard with Bill and Pete Swan hurling pitches to imaginary batters.

In those early years an annual highlight was when they would get to play under the lights at Lincoln Park. The legendary Gerry Hopcraft, who would come over to pitch batting practice as they were getting ready for playdowns in midget and juvenile, would later show him how to pitch a drop. Hopcraft, a lefthander, was, by far, the best all-around player in the league. “If you were going to pick one player to build a team around, it was a no-brainer,” said Eccles. “He could hit, field, pitch. There wasn’t anything he couldn’t do. I don’t think I ever heard of him getting tossed out of a game. I never remember him saying anything to an umpire. He was always very gentlemanly. Just a classy sportsman.”

“In 1960 we put together the first all-star team sponsored by Slee Lumber. Bob Cunningham became the coach. I remember getting cut at the tryouts at Victoria Park.” But he later got called up and pitched well, earning a spot on the roster.

The team won its first Ontario title in 1960. 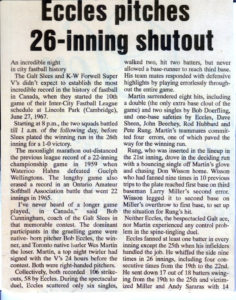 He was always aware of his leadership role with the teams he ptiched for. “That was part of learning to pitch,” he said. “The team looked to you for direction,. If you looked nervous, the team got nervous. If you look in control, the team is going to relax. Inside you could be churning and quivering, but you had to give that composure of ‘I got this under control – don’t worry, I’ll get you out of this.'”

He credits coach Cunningham – Baz Ramsay also managed along with Cunningham – with much of his success. “Bob was very influential in creating me as an individual. He allowed me to realize that I had some potential. And interestingly, my dad taught Bob at GCI.”

Off the field Eccles followed in his father’s footsteps, with a successful 34-year career teaching mathematics at Guelph’s J. F. Ross Collegiate and V.S.

Eccles found great joy in teaching, as he did on the diamond, or even when practicing pitching in Bill Doerfling’s backyard in that long-ago summer of ’61. But he would be the first to say that no one achieves success alone, and what glory came his way was only possible with the combined efforts of his teammates and coaches.

“I played with a group of very talented and dedicated friends,” he says.