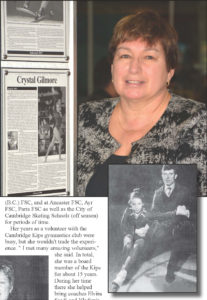 She is the mother of Cambridge Sports Hall of Famer Crystal Gilmore, but has some impressive sports credentials in her own right.

Born in Fort William, Ontario (present-day Thunder Bay), she  moved to southern Ontario at the age of three. Not long after, she began her figure skating career at six with the Hamilton Stoney Creek Figure Skating Club.

While living in the Hamilton area she attended Mount Albion P.S, Queensdale P.S. and Adelaide Hoodless P.S., but came to Galt to attend a skating school at Galt Arena Gardens. Kerry Leitch was a coach in the school at that time. “I used to carpool with other athletes from the Hamilton, Ancaster and Burlington area,” she said.

Not long afterwards she began training under Leitch at the Preston Figure Skating Club, at first commuting from the Hamilton area and eventually boarding with local families (Blakely’s, Schoenfelds) in Preston, where she attended William G. Davis P.S. and Preston High School. 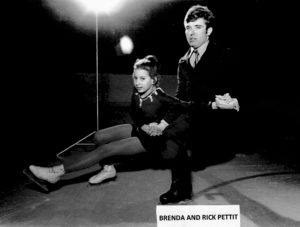 “Everyone was very welcoming and these folks became my teammates for many years,” she recalled.

Little did she know that her early years in figure skating would lay the foundation for a lifetime involvement in the Cambridge sports community, first as an athlete, and later as a coach and builder.

Eventually her family (parents Ralph and Marilyn Bridgman) moved to Preston in the early 1970s. She considers Cambridge as the place where she grew up, explaining: “I have lived here over 40 years.”

But in her early years here, there was a major calamity. The Preston Arena burned to the ground, and local figure skaters were forced to train in Brantford, Ancaster and at the old Hespeler Memorial Arena, waiting patiently while the new Preston Auditorium was being built.

Figure skating was her primary sports pursuit in those days, a sport she loved. She competed in singles and pairs, achieving golds in figures, free skate and dance.

She also began judging and eventually got her National Level Coaching Certification Level 2.

Along the way she guest-skated at numerous area ice shows in both singles and free skate pairs, and performed singles and pairs in the annual Preston Ice Shows, which were one of the highlights of the year.

It was at those championships that she had the opportunity to meet Olympic medalist Karen Magnussen.

“That was pretty neat,” she said.

There were other skaters she also admired.

“Being part of the Preston club, we had the opportunity to train at numerous spots in Canada and also in Lake Placid.” She was on the ice with many of the sport’s great like Toller Cranston, Ron Shaver, Scott Hamilton and Elizabeth Manley, not to mention teammates like Josie France and Paul Mills, Lloyd Eisler, Kathy Hutchinson and Jamie McGrigor, Sherri Baier and Robin Cowan, Shelley McLeod and Bob Knapp. Eisler, in fact, boarded at her house when he was younger.

In 1974 at the Canadians in Moncton she was second in Novice Pairs.

In 1975, with partner Rick Petitt, she finished first at the Western Ontario championships in the Junior Pairs, and then took second at the Central Canadian Divisional Figure Skating Championships in Brandon, Manitoba.

In 1976, skating singles, she was 7th in Novice Ladies at the Canadian Figure Skating Championship in London.

That same year she was honoured by being named to the Preston Figure Skating Club Honor Roll.

Her years in figure skating provided a foundation in sport, and after her competitive days were over, she continued her involvement as coach, judge, sports administrator, board member, parent and now grandparent.

“I was very proud of my work as coach and eventually head coach with the Hespeler Figure Skating club (1979-1995),” she said. “I met lots of amazing and committed board members, coaches, parents and skaters.”

She also had stints as a professional figure skating coach with the Prince George (B.C.) FSC, and at Ancaster FSC, Ayr FSC, Paris FSC as well as the City of Cambridge Skating Schools (off season) for periods of time.

Her years as a volunteer with the Cambridge Kips gymnastics club were busy, but she wouldn’t trade the experience. ” I met many amazing volunteers,” she said. In total, she was a board member of the Kips for about 15 years. During her time there she helped bring coaches Elvira Saadi and Vladimir Kondratenko from Russia. The pair coached such notables as Olympians Yvonne Tousek, Crystal Gilmore and Victoria Moors. Saadi was inducted into the Cambridge Sports Hall of Fame as a builder.

She’s also helped athletes access the Arthur White Sports Bursary and the Scott Thompson Fund from the City of Cambridge.

Gilmore is proud of all her children. Crystal’s accomplishments – she competed at the 2000 Sydney Games – are well known, but her other two daughters, Ashley and Megan, have also been heavily involved in sport. Ashley played field hockey at York University  – she was on the York team that won the OUA Indoor Championships in 2004 -2005. She and Megan were also part of the JHSS Field Hockey team that received the Cambridge Sports Awards High School Team of the Year Award. Megan, who played volleyball at Wilfrid Laurier University, was a finalist for Outstanding Women of Laurier, CIS Academic All Canadian.

“Sport teaches you values, life skills and lifelong friendships that go beyond your time on the ice, gym or track,” said Gilmore.