A native of Guelph, Ontario, Cam Allan’s youth was cen- tred around sports, especially baseball. In 1960 he played on Guelph’s Ontario Juvenile Championship baseball team, and a year later, coached the Guelph Midget squad to an Intercounty Championship.

He was also junior runner-up at the Guelph Cutten Club golf championship in 1958.

In 1965, after graduating from teacher’s college he accepted an offer to teach with the old Galt Board of Education.

For the next three-and-a-half decades he taught at Southwood Secondary School enjoying a career in which he coached various sports and touched many lives.

There he gained a reputation among his peers and colleagues as one of the best coaches in the province, both at the high school level and in the community, where he coached the Galt Junior Pepi’s and the Senior Intercounty Terriers.

Allan was a beloved teacher, coach and advisor to a couple of generations of students.

In his first year he began coaching football at Southwood, a sport he continued to coach until 1997. During that period his teams captured eight league championships and had a 34-game unbeaten streak from 1973-1977. 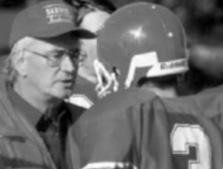 Allan also proved to be a successful coach for the school’s badminton and wrestling teams, sports that, like football, he never played.

He coached wrestling for a decade, producing eight championship teams including two Ontario-champions, with a dual meet record of 112 wins and five losses.

He coached eight championship badminton teams including the first two CWOSSA champions in the school’s history. His impact on his students and student athletes was immeasurable; many lifelong friendships developed from these.

Allan found time to curl in Galt, placing second in the Ontario Governor General’s competition. One of his teammates on that rink was Al ‘Big Al’ Findlay. He was chairman of several curling committees between 1966 – 1984.

After his retirement, in 1997, Southwood’s football field was named “Cam Allan Sports Field” in his honour.