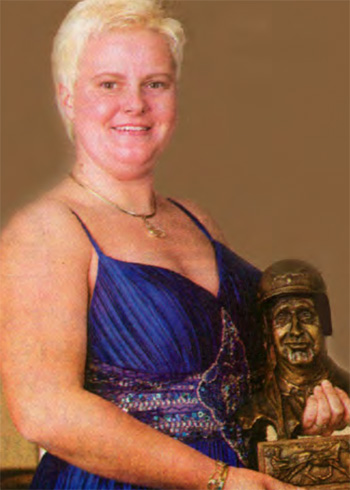 Casie Coleman, a four-time recipient of Canada’s trainer of the year honours – the only female to ever win the O’Brien Award – is a Victoria native who now resides in Cambridge.

She’s made a name for herself across Canada and the U.S., having trained nearly 1,500 winning horses, and along the way has become the sport’s winningest, and richest, female trainer.

Some of the horses she’s trained include award-winners such as Moving Pictures, Idyllic, Sportswriter and Western Silk.

Though she has had a love affair with horses from a young age – Coleman became involved with horses as a young girl, working as a groom for her father – a tragic accident in 2000 nearly curtailed her career.

It happened at Sandown Park on Vancouver Island. She was mixing an alcohol-based linament to warm her horses’ hooves when it ignited. She suffered third-degree burns to her legs and right arm, and irst-degre burns to her neck and face.

The barn fire had almost killed her, leaving her with burns to 22 per cent of her body, and even more serious burns to her face and neck. She spent three months of intensive care at Royal Jubilee Hospital in Victoria and underwent six skin grafts.

Always considered tough, she proved it during her recovery. Years later, after proving to be one of the sport’s best trainers, she admitted that she “wasn’t as scary as some people think.”

Still, her injuries were severe and it would take every ounce of resolve to succeed. Undeterred, she worked hard at rehabilitation and in 2002 moved to Cambridge, centrally-located in southern Ontario’s thriving harness-racing industry. The move came when her parent moved their stable to the Flamboro Downs area just outside of Cambridge. 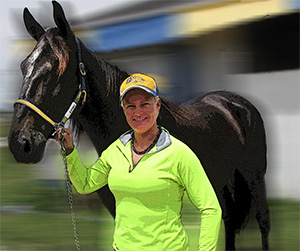 Her hard work, in a male-dominated sport, soon paid off and she has become one of the sports top trainers.

“She dedicates herself to honing her skills more than any horseperson I have ever seen,” said Ken Middleton. That work ethic took her from the bottom to the top in a little over a decade.

Her parents, Phil and Linda, trained horses at Fraser Downs in Surrey, B.C., and at Sandown Raceway on Victoria Island, which guaranteed that she would grow up around horses.

But by 2005, just two years after going out on her own and with a grow- ing stable, it became apparent that she was one of the most talented trainers in southern Ontario when when a three-year-old pacing colt name American Ideal won a Bluegrass division in 1:47.4, at the time the fastest race mile ever by a three-year-old. American Ideal won $747,579. The previous year she had risen from relative obscurity in her first season as a regular trainer on the local circuit and closed out the year that December passing the 100- win mark and earning more than $1 million in season’s earnings, the young- est female trainer in Canada to ever achieve both milestones.

Clearly 2005 was her breakout year. American Ideal raced in the Pepsi North American Cup and the Meadowlands Pace, making Coleman the first female in Harness racing history to enter a horse in two million dollar races in one season.

Capping off an incredible season, she was awarded her first O’Brien trainer of the year Award, an award she repeated the following year (2006).

Today most of Coleman’s horses race in Toronto, but in the first few years they ran mostly at Flamboro Downs.

Though her life centres on horses, when she’s away from the track she enjoys movies, and counts lobster as her favourite food. She also likes to play poker.

She counts as one of her greatest honours being invited to be a guest speaker at Truro Raceway Awards Banquet in Nova Scotia.

In 2009 she made a special trip back to Fraser Downs in BC to host a fundraising day on Remembrance Day for the hospital that nursed her back to health. They raised $24,000 for the Burn Unit at Victoria’s hospital.

“The hospital staff put me back together,” she explained.

That year she set personal seasonal bests of 275 wins and more than $6.1 million in earnings.

By any standard she is one of the most accomlished women in Canadian harness racing, but Coleman is quick to give credit for her success to her parents and principal owners of the horses she trains at her Classy Lane Training Centre in Puslinch.

She has been known to dole out hefty Christmas bonuses to her stable staff, sponsoring a lavish dinner and sharing her success. Several years ago Coleman decided to buy a racehorse for her staff and give the winnings to her team at Christmas.

A few years ago she donated to a fund to help trainers and owners affected by a barn fire at Lebanon Raceway in Ohio when two grooms were killed along with 43 standardbred racehorses and two miniature horses.

“This past year was a roller-coaster ride,” she said. “We had a lot more stakes wins and less starts but there were also some downfalls. I’m honoured to have such a great group o hoprses and staff in my barn.”

“this is all I’ve ever wanted to do and all I ever knew how to do. Out in B.C. it was a hard way to make a living and my parents tried to guide me toward something else, but they couldn’t. It’s unbelievablewhen I think what’s happened to me since then. Every once in a while I look around the house at all the pictures, blankets and trophies. It really is hard to imagine.”