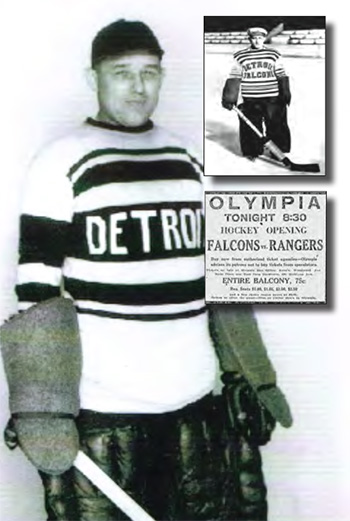 Dolson, a Hespeler native who moved to Galt in 1903, holds the distinction of having the all-time lowest goals-against average for Detroit. He also held the NHL record for shutouts in a season, with 10, which wasn’t broken until Terry Sawchuk came along more than a generation later. That season he played 40 games of the 44-game schedule.

Dolson was diminutive in size, but had a talent for netminding, yet Detroit boss Jack Adams, who had first been impressed with the Galt lad and signed him to a professional contract with the Detroit Cougars (later the Falcons and then the Red Wings), replaced him after his standout rookie season of 1928-29 — he posted 19 wins and earned the record 10 shutouts — in which he had a GAA of just 1.37.

Adams didn’t feel that the man nicknamed Dolly was a legitimate big-league goalie, and replaced him with Bill Beveridge for the 1929-30 season.

A season later Dolson was back playing goal for Adams’ team after Beveridge joined the Ottawa Senators.

Dolson had another good year with a GAA of 2.29, which was impressive given Detroit had a poor team that season. He also posted six shutouts.

The following year the Ottawa Senators folded and their players were dispersed around the league. Detroit quickly secured the services of star goalie Alex Connell. He played only the one season in Detroit, but Dolson was relegated to the minors, and played sparingly from 1931-1933 with the IAHL’s Cleveland Indians.

Before playing in the NHL Dolson played for an outstanding Galt squad out of the old Queen’s Square Arena which was where the present-day library is located.

He played for Galt in 1914-1915 in the OHA Junior Northern Hockey League (NHL) . That team, said the late Abbie Kilgour, was the best junior team the city of Galt ever put on ice, bringing home the first junior NHL and amateur titles.

At the time, Galt had a population of about 10,000, yet 3,000 fans tried to squeeze into the Queen Square Arena for the championship game.

Dolson, said teammate Bill Vrooman, was the best goaltender in the league, but was passed over for the all-star team.

The next year Dolson went overseas with the Canadian Armed Forces and was decorated with the Distinguisherd Conduct Medal. When he returned, he joined the senior Galt Terriers of the Big Six League and played ball — he was a good catcher and hitter — with the Galt Intermediate and Senior Terriers.

Offered a chance to work for the CNR in Stratford, he played with the Stratford Nationals and called the town home for the next 54 years. From 1919 until 1923 he played for the Galt Terriers Intermediates in the OHA. From there he went on to play with the senior Stratford Indians for three years, then stayed in the city to play for the Nationals in the Can- Pro League. After leading the Can-Pro circuit with 25 wins and helping the Nationals win the league crown, Dolson moved up to the NHL.

He picked up where he left off when he moved up to the NHL the next season.

The talented netminder played all 44 games for the Cougars in 1928- 29 and posted a 19-16-9 record in the regular season and an 0-2 mark in the playoffs. The next year he saw most of his game action with the London Panthers of the IAHL then won 16 games for the renamed Falcons in 1930-31. Dolson then spent two years as a back up on the IAHL’s Cleveland Indians before retiring in 1933.

He played against some of the game’s greatest players, including Howie Morenz, Hap Day, Busher Jackson, Lionel Conacher, Dit Clapper, King Clancy and a host of others. He died in Statford at age 78.