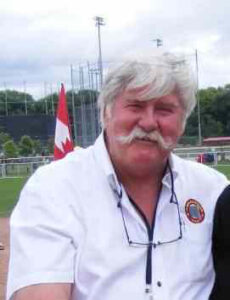 As a youngster, Hespeler native Dan Donahue, who grew up near the playing fields of Forbes Park and Central School, would catch lacrosse balls his father hurled at him. In those early days  he learned to put his body in front of the ball and to make the catch, because if he missed, it usually meant their informal practice was over.

He began playing softball at five or six, and later, Tim Turow tried to encourage him to play baseball in Preston, but his family had no car and his father wouldn’t let him bike home at night.

“It was a pretty good childhood in Hespeler,” Donahue recalls. “Everyone knew everyone else. The doors were never locked.”

Within a few years, at 15, he was asked to play second base – he was a southpaw – on a midget team. In 1968 he was playing on the Hespeler Tartans of the Inter-City League – the team eventually became Hespeler Simplicity.

“It was fierce competition,” he says of those long-ago days. “We were an Intermediate team playing Major teams.”

Then one day in 1975 Owen Sound coach Lloyd Simpson asked, “You wanna’ play in Detroit?” They needed a first baseman for a doubleheader in the Motor City, and they wanted Donahue.

He was game. He met the Owen Sound team bus at Grand Bend and they crossed at Port Huron, proceeding to Detroit to play the Ruperts, with the likes of such standouts as pitcher Bonnie Jones, “probably one of the best five pitchers I’ve ever seen,” and Edmore Johnson. “We had a dandy time, and I had a couple of hits and a stolen base.”

For the record, Dick Hames was the best pitcher he ever saw, and he counts it an honour to have played against him.

The Donahue legend was growing.  For decades fastball fans knew Donahue could “talk the talk,” but in those early years he started proving he could also “walk the walk.”

Over the next decade and more Donahue would prove himself to be one of the game’s best, earning acclaim in a stellar playing career that finally came to an end in 1984.

The first baseman was known for a solid “in-your-face” defence. He was a gold-glove first-baseman who was a force at the plate, where he consistently produced extra-base hits.

From 1968 to 1975 he played for the memorable Hespeler team – and helped them earn a pair of  Inter-City championships, as well as a 1973 OASA crown.

Donahue won the league batting title and was named MVP in 1974.

From 1975-1980, he was a key member of the successful Owen Sound King Farms team that won the 1979 OASA Senior title and was the OFL champion (1979). That year he captured another batting championship, hitting .340, and won the MVP title.

“We went everywhere to play,” he says of his career, including Phoenix, Arizona, Santa Anna, California, Sioux City, Iowa, Midland, Michigan – indeed about 30 states in total – as well as New Zealand and Panama, and every province except Nova Scotia.

In 1981 he joined the Kitchener Edelweiss/Pride of Canada  Club; the team finished as OASA runner-up to Sarnia Glis in 1982.

During his playing career he competed in nine world tournaments with four different teams, and one ISF world tournament with Team Canada (1984). The national squad won a silver medal with Donahue batting .536 in eleven games. He was at the top of his game.

Donahue knew only one way to play the game: all out. He had no gears, no speed other than guns blazing and full speed ahead. A 1984 altercation with an official at the OASA Eliminations in Scarborough resulted in a six-year suspension that lasted until his 1990 reinstatement. It was the only blemish on a storied career.

Since that time his impact has been profound, coaching Owen Sound Tiremen & Selects, Milverton Millwrights, and the Jarvis Gamblers to two national titles, seven provincial championships, and a silver ISC medal.

His highlights are many. Once, in a 1980 international tournament and playing for Owen Sound, Donahue came to the plate in the 22nd inning. It was 2:30 in the morning and the place was packed. With the score tied 7-7, and a man on second, the Grimsby Peach Kings pitcher, Wally Dick, tried to intentionally walk him.

Donahue had gone seven for seven at the plate, with seven doubles. Now three balls came and went. The umpire, seeing another outside throw, didn’t see Donahue swing. “Ball four!” he shouted.

Donahue looked back at the umpire. “I swung at it!”

The umpire turned to the catcher. “Did he swing?”

The next ball came high and outside, but Donahue swung at that, too. Strike two!

At that, the Grimsby manager Larry Christie came storming out of the dugout, fuming with anger. Pointing at Donahue he yelled, “Strike him out!” Or at least, that’s the sanitized version.

It was a full count and the pitcher, with one ball remaining in his arsenal, tried to strike Donahue out.

“He threw a lifter that was up about at my eyes and I took it out of the park.” Game over.

He was in one other 22-inning game, in Saginaw, Michigan, against Midland, Michigan. The game ended at 4:45 a.m. – they lost the nailbiter – and they were scheduled to play at 8 a.m. on a nearby diamond, so they walked over to the other diamond and waited, only to lose to Tulsa.

At the Worlds in Phoenix in 1980, down 5-0, Donahue came to the plate and hit a three-run triple, which, coupled with a late-game rally,  helped them score six runs to win the game.

“That was probably the biggest hit I’ve ever had in my life,” he said.

He went to the Worlds nine times as a player and nine times as a coach. He played in the National Championships seven times – he has two golds, two silver and two bronze – and he was inducted into the Canadian Softball Hall of Fame in 2006.

“I love the game,” he says. That love and the camaraderie at the ball park is in evidence whenever he takes in a game, or talks about the sport. His impact in fastball circles is unquestioned, and he continues to give back to the game. He was recognized as a Fastball Legend inductee for his outstanding career in the Ontario area, and was inducted into the Owen Sound Sports Hall of Fame in the spring of 2016.

As a young player he was helped by some legendary competitors like Marty Myska and Gerry Hopcraft. “These guys were great to me when I was young.”

His greatest joy, aside from playing, was in helping young men develop into better players. He coached nine players who made it to the national team.