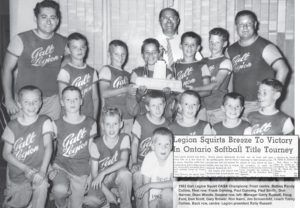 The Galt Squirts all-star softball team captured its first OASA provincial championship in 1961 and repeated for the next three years.

The boys were coached by Tubby Collins from 1961-63, and by manager-coach Jerry Russell.

Their record of four consecutive provincial wins still stands to this day (2017).

Collins and Russell had an uncommon knack for being able to mould these young boys into champions. The team was a perennial powerhouse.

Beginning in 1961, the team captured the inaugural All-Ontario William Anderson Memorial Softball championship, and the season culminated with the OASA Provincial Squirt Championship.

All told, in addition to winning four provincial OASA titles, a feat that has yet to be repeated, the teams captured four consecutive William Anderson Memorial Championships, along with three Inter-County titles.

The roster changed from year to year owing to age restrictions, and yet they remained consistently on top.

The coaches worked on the basics with the boys but never at the expense of having fun and made sure the boys had the opportunity to simply enjoy playing the game. That was a big part of their success.

In one championship series outfielder Paul Dunning, wearing a cast on his right hand, laid down six perfect bunts.

The players are long removed from those championship days on the ball diamonds at Soper and Lincoln Parks, but the memories of these rare teams lives on.