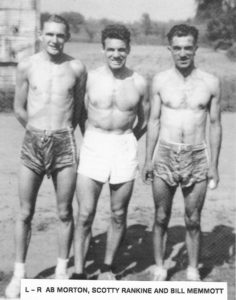 The team won the team prize at the Canadian Marathon Championships in 1947, with Morton taking first, Rankine second and Memmott eighth.

At the famed Berwick Run for the Diamonds, held on the American Thanksgiving in Berwick, Penn., the team comprised Rankine, Morton and Wilson in 1948, while in the two preceding years (1946, 1947) it consisted of Rankine, Morton and Memmott. In each of those years the Galt team, which was coached by Bill Martin, won the team prize over the nine-mile course.

Morton was Canadian marathon champion. Rankine, who was in his prime in the 1930s, was a two-time Olympian (’32 and ’36). Add Memmott and Wilson, both of whom were talented runners who trained with Morton and Rankine and could hold their own in any long distance race, and you had the makings for a remarkable team.

Wilson, a young runner who came up through the ranks as Rankine’s and Morton’s careers were winding down, learned a lot from the veterans. And although he proved his mettle, he never achieved the individual heights that Morton and Rankine achieved, eventually leaving the sport to pursue a career.

But in later life Wilson returned to running, long after Rankine and Morton retired, and became one of the top masters middle distance runners in the world, competing at masters competitions — both nationally and internationally — well into his 70s.

Johnny Kelley, two time Boston winner (1935, 1945) and a close friend to Rankine and Morton, was one of the best American runners of his day, and had high praise for Rankine.

But his admiration extended beyond the roads or track. “We had a lot of fun at Berwick over the years,” he says. ‘Scotty was very funny. He had a lot of funny anecdotes, mannerisms and sayings and we all enjoyed him very much.”

In the 1947 race Wilson finished 11th, beating out Hamilton’s Whitey Sheridan and other prominent runners. Rankine ran fourth that year, the first Canadian behind the winner, Browning Ross. Morton led the race for most of the way until he got cramps, and finished sixth. Memmott was 19th.

Wilson recalled Rankine being one of the most popular runners there. Rankine won the race five times, and after the Galt runners won the team trophy, they gave it to Wilson, ‘the youngster.’

Berwick fans – it was a large-scale annual race that concluded on the track inside a football stadium at halftime of a big football game – loved the diminutive Canadian with the Scottish accent.

It was at the Hamilton Around the Bay Road Race, North America’s oldest and known as  Canada’s Boston Marathon, that Rankine established his reputation; he won it an unprecedented seven times before he hung up his shoes.

At Berwick’s famed nine-and a-third mile Run for the Diamonds, winners were presented with a diamond ring. In his prime, and even beyond, Rankine was nearly unbeatable in Berwick.

The Around the Bay and the Berwick were no pennyante races. Both attracted North America’s top distance runners.

Although the Berwick ‘Marathon’ was overshadowed by the full-length Boston Marathon, Berwick was said to be the tougher race. There was a hill, nearly two miles long, at Berwick, and as everyone who ever ran against Rankine knew, he was king of the hills.

“Scotty was built for hills,” said longtime friend Whitey Sheridan of Waterdown. “He could take the hills and rundowns.” Sheridan, who was 79 at the time of Rankine’s death and was still running – he lived to be 92 – knew him as a fellow competitor, and as such, Rankine, he says, was tenacious and confident. “He had that tenaciousness. He went out to win.”

Rankine and Sheridan were inducted into the Canadian Road Racing Hall of Fame late in 1994. If Rankine distinguished himself at Hamilton and Berwick – he beat some of the world’s best at both races – he gained a worldwide fame at other events too.

If there was ever a more dominant long distance runner in Canada, they were few and far between. He competed in roughly 350 races, reportedly winning nearly 250 of them; he medaled in most of the rest. He was there, wearing Canada’s maple leaf singlet, at the 1932 Los Angeles Olympics and again, in Berlin, for the 1936 Olympics.

There were British Empire Games, and medals, and other great races – Rankine finished in the top seven at Boston three times – but through it all Scotty was the likable runner from Preston, unchanged, always laughing. And it was the same for affable but immensely talented Morton.

With Rankine and Morton as the mainstays, and others like Memmott and young Wilson to round out the team, the runners from Galt topped the world’s elite on several occasions to win the team title at the big race in the small Pennsylvania town.