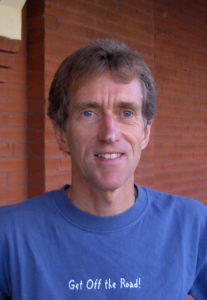 George Aitkin personifies the sport of running, not only in Cambridge, but throughout southern Ontario and across Canada.

Anything to do with running in Cambridge or the vicinity within the last 40 or 50 years, means that Aitkin has likely been part of it, one way or another, as runner, organizer, coach or photographer.

The list is long, ranging from the annual Terry Fox Run — he’s been involved from the beginning — to the now defunct, but long-running, Can-Amera Games and the Cambridge Harriers.

His influence has been extraordinary. In addition to guiding generations of runners through Can-Amera or with the Cambridge Harriers or the youth running club called the Cambridge Colts, he’s made a deep impact on such Canadian stars as Doug Consiglio and Nathan Brannen, both Olympians and Cambridge natives.

Consiglio was the first Canadian to clock an indoor sub-four-minute-mile, and nearly two decades later it was Brannen who bettered it.

Characteristically, both runners are also friends. 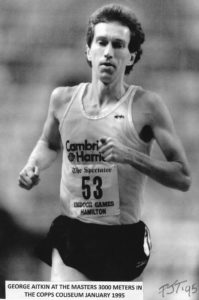 In an article written by journalist Paul Gains for Running Magazine, he told Gains: “Running and photography, sort of, have been my life. I’ve been a runner since 1967. I’ve run so many miles and races. Some people know me mostly as a running photographer but I’ve run almost 1,200 races in my career. I keep thinking ‘Wow, I’ve taken so many pictures. How did I have time to do all the racing I’ve done too?’ If I’m not at a race to take pictures I’m there to race.”

Aitkin has chronicled his running life, beginning with his first foray into the running subculture in 1967, to the present. All told, he’s logged enough miles to have run four times around the planet, and then some.

As reporter Kevin Swayze noted in a Record article several years ago, Aitkin, on average, runs 2,000 miles a year. At his peak, in 1978, he ran 3,247 miles, and recorded his best-ever marathon finish of 2 hours, 35 minutes.

Running has literally been his life. What’s more, his love of history has meant that through Aitkin, there was a perfect bridge built between past glories of local runners like Cliff Bricker, Billy Reynolds, Scotty Rankine and Ab Morton, and the modern runners like his good friends Kevin Sullivan and Brannen.

He’s done it all, from marathons to track races, and almost everything in between. But it is cross-country that is first among equals. His love for the outdoors, and consequently, cross-country, began most likely in his early childhood when his parents would take the family on long walking expeditions, typically after church. They’d get a taxi out to the country and would be dropped off, seemingly in the middle of nowhere, then hike and have lunch in the hills and woods as they made their way back home. The taxi driver thought they were crazy, but it was a learning experience Aitkin cherishes. He grew to love trees and plants, the countryside, and the animals and birds along the way. It instilled in him a love of nature, one he has pursued in all the years since through his training runs and photography exploits.

His father was an amateur photographer, so he came by it naturally, taking his first photographs not long after starting to run, with a Kodak Pocket Instamatic 110.

But how did he get the running bug?

It was May 16, 1967, and he was a Grade 8 student at Stewart Avenue Public School when teacher Jim Cox encouraged him to run in the Around the Bridges Race, which that Centennial year was being held on the track at nearby Glenview Park Secondary School.

Cox took a few promising student-athletes out to train for the race. Aitkin won a gold Centennial badge for his efforts, a patch he’s retained all these years.

“He’s kept it up ever since,” noted Cox in 1997 when Aitkin celebrated his 30th year of running with a five-mile run.

Helping Aitkin celebrate that milestone in 1997 – it put him over the 66,000 mile lifetime mark – was fellow runner Francine Darroch, who later accepted a running scholarship in the U.S. and now has her Ph.D.

Aitkin likes nothing better than to see some of the runners he’s known and had a hand in helping develop, achieve success.

Cox, and fellow teacher Ken Mark, also gave Aitkin another opportunity, years later, when they handed over the convenorship of the Can-Amera track and field events to him.

“When you start to give back to the sport, that’s when you see the big benefits,” says Aitkin. One of his former athletes was Josh Sommerfeldt, who went on to star as McGill University’s quarterback. He was co-winner of the 2003 Cambridge Athlete of the Year with Brannen.

Few have been as passionately involved in the sport of running, for a lifetime, the way Aitkin has been. And even more than the coaching, and the camaraderie, it is his passion for the sport that has left such a lasting influence on the runners he has nurtured.