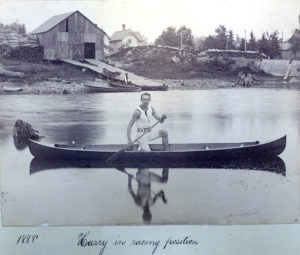 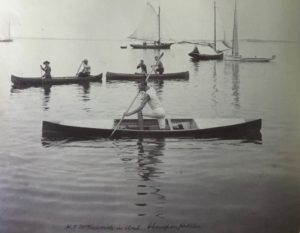 On a summer afternoon in August 1920, Henry Ford, one of the best-known men in the world, drove unceremoniously into Galt to see his Canadian friend, Dr. Harry F. MacKendrick.

MacKendrick was no stranger to fame, though his fame paled in comparison to that enjoyed by Ford. In the last decade of the 19th century he had been a world champion canoeist – he was undefeated in singles – before embarking on a medical career. And although he was one of the most respected residents and leaders of Galt, his more widespread fame as a canoeist had long faded from his athletic heyday nearly 30 years before.

Dr. Harry Frederick MacKendrick was born in Galt on June I, 1866, and before the century was out, had won fame for his canoeing and soccer prowess. He was the youngest of five sons of James MacKendrick and Clara Crane.

The elder MacKendrick had come to Canada from Scotland as a boy of seven with his father and four brothers, landing at Trois-Rivieres, Quebec, in 1837. Thirteen years later Dr. MacKendrick’s mother, Clara Crane of Suffolk County, came to Canada. Her father and mother, with seven children, braved the eight-week passage by sail. One child didn’t make it and was buried at sea.

While Harry MacKendrick would go on to become a well-known physician and a leading citizen in Galt, the other siblings who lived to adulthood also made names for themselves.

His older brother, John Noble MacKendrick, a strong canoeist in his own right, also remained in town, and like his brother, became one of its leading citizens.

They spent a great deal of time on the water, not only in Galt, but at American Canoe Association (ACA) meets throughout the northeast. Harry’s earliest recollections of Galt were of a small town with wooden sidewalks and mud roads where, as a remnant of a not-too-distant pioneer past, a tree stump could still be seen on Main Street in front of where the Royal Bank would later stand.

His boyhood and young adulthood bridged the early years of the community to the beginning of the 20th century. “Wooden verandahs were on all the stores in Main Street,” he said. “They protruded over the sidewalk and their supports were used as tie posts. Every time there was a runaway horse – and there was one at least every Saturday – it became a question as to how many verandahs would be knocked down.”

Hockey sticks in those days were cut from tree roots, with a natural curling root being favoured. “Technique did not receive the consideration that it does today,” said MacKendrick in 1947. “The man who hit the hardest and skated the fastest was the best player.”

“I often think that our boyhood days were very happy,” he said. “After tea the boys in the neighbourhood would gather around one of the huge stumps and set fire to it, but promptly at 8 p.m. dad would put his fingers into his mouth and whistled and that was the curfew for us.”

Galt has always been a great athletic town, said MacKendrick, noting the fame enjoyed by the three Woods brothers. Dave was the champion mile runner of America. His brother Jack was the half-mile champion and Alex was the 100mile champion.

“Then there was Jimmy Smith who went down to the Centennial in Philadelphia in 1876 and won the gold medal in the 100-yard race against an outstanding field.”

MacKendrick could recall Andrew Jenkins, a Galt high-wire tightrope walker – the best in the world at the time – who traversed the Niagara gorge by riding a bicycle of his design across the rope, the first time such a feat had been accomplished in America. Galt’s Goldie McCulloch refused to build the velocipede; it took a firm in Hamilton to do it.

Jenkins put on an exhibition in Galt on May 24, which was the big holiday in Galt each year, and almost everyone in town congregated at the large recreation park where the CPR station now stands. That was the first playing field in town, where all the cricket, baseball, lacrosse and horse racing events took place.

“Professor” Jenkins was called the “Canadian Blondin” and the bicycle- like contraption he traversed Niagara with was called a velocipede. He rode it over the high wire above Niagara Falls on August 26, 1869.

MacKendrick left Tassie’s school (forerunner of Galt Collegiate) in 1881, following an altercation with the Headmaster, Dr. Tassie, who chased him out of the school. “I being a safe distance in the lead, called him some unprintable names and threatened to spoil the contour of his shapely and proud body.”

They both retired from the encounter soon afterward, somewhat out of wind. What more could be said?

Tassie was more than cross at the youngster, and MacKendrick was too sharp-tongued forhis own good, cal ling Tassie some unprintable names that could not be repeated in polite company.

MacKendrick didn’t return for seven years, at which time he matriculated in 10 months and entered the University of Toronto’s medical school.

MacKendrick played with the Canadian association football (soccer) all-star team which won the American Football Oiampionship, defeating Newark, N.J., 4-1. That game had been one of the highlights of the town ‘s sporting life; a total of 8,000 spectators saw the Galt team win the title, at a time when the population of the town was about 5,000.

In 1886 MacKendrick won the U.S. singles canoe championship in a regatta on the Thousands Islands in the St. Lawrence, winning with the one-knee stroke he developed and which gained widespread acceptance.

In 1890 MacKendrick, along with his father and two of his brothers, William and John Noble, competed in the international canoe races off Long Island, New York.

MacKendrick was trim, sinewy strong, and ready to take on the world. He was at his physical

The championships were held at Jessup’s Neck, on Peeonic Bay, not far from Sag Harbor in the summer of 1890; the waters were considered the finest cruising waters in the world. The first “saltwater meet” was notable in that MacKendrick won the single one-mile title, besting the previous record by 16 seconds. Such a feat was almost unheard of.

With his brother Jim, he also won the tandem one-mile race. People on Long Island began whispering the name MacKendrick with awe and respect. 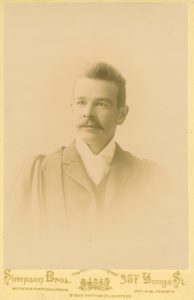 He brought fame not only to Galt, but to Canada. In that meet off Long Island there were 256 contestants – 26 were Canadian – and of the 13 prizes offered, II were won by Canadians. seven of them by the MacKendrick family alone (Harry, John, William and their father). When MacKendrick retired from competitive canoeing, it was said that he was never defeated in 122 races in ” singles” competition. He was to canoeing what Ned Hanlan was to rowing.

His entire family was involved in the sport. With his father and two brothers, they won four world titles during that era.

Canoeing wasn’t his only sport. MacKendrick’s talent in other sports was obvious – he was a member of the Canadian all-star team that won the World Soccer a championship in 1885. And his brother, John Noble, aside from being a champion canoeist, was a noted sprinter at the University of Toronto .

In addition to becoming a physician and world champion canoeist, Harry would also gain renown as a skilled horseman, and was a two-time president and one of the original 1901 directors of the Galt Horse Show.

Physician, world-champion canoeist, horseman, an ex-president and original director of the Galt Horse Show Association, golfer, curler, keen sportsman, serving as an executive of many clubs, World War One veteran and an enthusiastic gardener, Dr. MacKendrick was one of Gall’s best-known citizens. He is buried at Mourn View Cemetery in Galt, not far from Professor Jenkins.