As early as anyone can remember, baseball pitcher Jason Gooding was a standout on the ball diamond, and as he developed up the ranks, he excelled at every level.

As a teenager, he was almost unbeatable. While playing for the Cambridge Bulldogs Junior Intercounty team, he and batterymate Chad Dube were a force to be reckoned with. Both players were later drafted by Major League teams.

With Gooding in the lineup, and Dube catching, the team was both feared and admired by opponents.

Many scouts sang his praises, but no one was higher on Gooding than his Bulldog coach, the late Terry Clark. Clark, a Brantford resident, had baseball in his blood from an early age, when he would hang around Agriculture Park in the Telephone City and watch the Red Sox play.

Gooding was a natural. And it came as no surprise when he accepted a scholarship to play college ball in the U.S.

Before that he was a key member of 1991 Canadian World Championship Youth team, a team whose performance was selected as Baseball Canada’s top highlight in their 50-year history thanks to the team’s world title, which was won in Brandon.

Two years later, in 1997, as a starter with Texas Tech University, he was named an NCAA First Team All-American.

There, in Lubbock, deep in the heart of Texas, Gooding’s presence was impressive from the get-go. In just a single season at Texas Tech, he established himself as one of the top left-handed pitchers to ever play at storied Dan Law Field. From the moment he took to the field, Gooding was dominant.

He finished the 1997 season with a perfect 11-0 record, hurled three shutouts and struck out 137 batters. 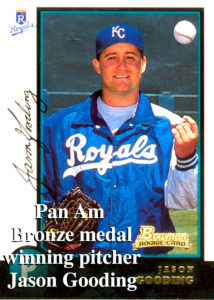 His 137 strikeouts was a record at the time and even today, two decades later, still ranks second on the school’s single-season all-time list.

Gooding, under coach Larry Hays, helped pace the Red Raiders to the inaugural Big 12 Championship that year and picked up First-Team All Big 12 and First-Team All-America honors in the process.

Texas Tech has a long and distinguished baseball history boasting a number of Major Leaguers. In 1997 the school ranked 10th in baseball attendance nationwide. Gooding was their undisputed star.

The list of honours he earned in Texas was a long one: 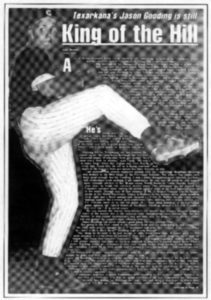 Gooding was considered by three-time All-American catcher and battery-mate Josh Bard to be the best collegiate pitcher in America. Bard was a three-time All-American, including earning first team All-American honours by three publications as a junior in 1999. He was a third-round draft in 1999 by the Colorado Rockies after helping lead Tech to a pair of Big 12 titles.

But for Gooding, his NCAA career at Lubbock, as storied as it was, didn’t last long. Following his banner year, he was drafted by the Kansas City Royals in the fifth round of the 1997 MLB June Amateur Draft.

It had been a lifelong dream to play in the Majors. The 5′ 11″, 190-pounder was considered small by Major League standards, but he had proven his mettle in the NCAA.

Three years earlier he was taken 151st overall by the Cleveland Indians in the 1994 MLB June Amateur Draft after playing for Seminole Community College (Sanford , FL).

In 1999 Gooding was selected to play for Canada’s national team. The Canadian squad, playing at the Pan Am Games in Winnipeg, was more than a match for the best teams from across the Americas, including the American team. Gooding was on the mound for Canada’s stunning bronze medal victory over Mexico.

Few players can equal the many honours and awards he received, and although his dream of playing in he Majors never materialized. He played in the minors and was called up to play an exhibition game for the Major League Royals.

Still, what he accomplished during his impressive career was the stuff of legend. Not only was he the best pitcher to ever come out of Cambridge, but as a member of the 1991 Canadian World Youth team, he was inducted into the Canadian Baseball Hall of Fame (team) and is a Texas Tech All-time Letter winner at a school where he and Monty Ward (Ward-151; Gooding-137) hold all-time strikeout records.