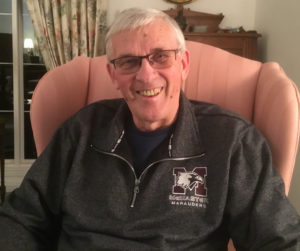 Retired teacher Jim Baird has had a long love affair with sports – he played softball from the age of 10 onwards – but if there is one thing he has come to be known for, it’s basketball.

A former president of the Ontario Basketball Association, Baird is a 1997 winner of the Don and Benita Rope Sports Contributor Award. He played varsity basketball at McMaster, where his daughter Susan later played – son Rob played at the University of Waterloo and coached Southwood’s senior boy’s team to an all-Ontario championship in 2007 – and he founded Cambridge Basketball with Tripho Bogias. Bob Howison also played a big role in those formative years. And earlier, Baird helped launch the Cambridge Men’s Spring League.

He served as basketball convenor with both the Canada Games for the Physically Disabled, and for the 1990 Canada Summer Games, while also participating in the annual Can-Amera Games between Cambridge and Saginaw Townships, Michigan for many years.

He was also the local, regional and provincial coordinator of Junior Development Programmes and instructed Level 1 theory courses in the Canadian Coaching Certification Program in 1985-86.

His list of accomplishments in local and provincial basketball circles is extensive, but he was also active in the community, serving on the city’s athlete of the year sports selections committee and as chair of the sports banquet committee in 1986 and 1987.

A walk through his rec room at home reveals his love of coaching. Posted on the wall are photos of the teams he coached at high school and with Cambridge Basketball. His teams were perennial contenders; some were champions. He took his juvenile girls teams

to the Ontario finals on several occasions. He is proud of his players, not just for what they achieved on the court, but in life, and easily recites where they are and what they are doing as he looks at each team picture.

He taught them the fundamentals as well as anyone could teach them, but more than that, he taught them how to believe in themselves, and to transfer the success they achieved on the court to their lives outside of basketball.

Born in Leamington, Ontario, Baird moved to Galt when he was an infant – his mother (maiden name Spalding) was from Galt – when his father was transferred by the Royal Bank.

He began his formal education at Dickson Public School, and also attended st. Andrews and Highland. The only gynmasiums in town then were at the YMCA, GCI and the YWCA. It was at the YW where he saw his first basketball game with the Galt Intermediate team.

Living in a stone house on the Crescent, he was centrally located to the ball diamonds and fields of both Victoria Park and Dickson Park.

“We were always at the park, Victoria or Dickson,” recalled Baird. The Spencers – father and son -looked after the two parks, and all was well until the kids dug holes to play Tibby.

Tibby, a hybrid between baseball and cricket, was a sport unique to the Galt and south Waterloo area.

“I’ve never heard of it played anywhere else.” They spent time in the lanes of west Galt, and got home for a short lunch before heading back to school or the park to tag up for scrub.

Friends from those formative days still get together a couple of times a year, thanks in large part to John Reid, who organizes the get-togethers.

Softball and basketball were his two favourite sports as a youngster. In Grade 5 a teacher named Jim Armstrong introduced him to basketball, but it was only in Grade 9, in the old gym at GCI, that he began playing the game. His coaches were history head Bill McHoul, for junior, and Nick Speropolis in senior. The opposition in those days included Guelph Collegiate, Brantford Collegiate, Kitchener Collegiate, Eastwood, IF. Ross, Pauline Johnson, and later, Glenview.

“The gyms in Guelph and Brantford were slightly better than the gym at Galt Collegiate,” he recalls, “but not much.” He began playing softball with the Galt Gores early on, under coach Herbie Morton, and he continued with them through the mid-to late-1960s.

“I’d hurt my knee and so really didn’t play miuch near the end, but did a bit of coaching.” The Gores were perennial victors in those days, boasting a

star-studded lineup that later included Gerry Hopcraft. “He should be in the Hall,” said Baird. “He was a phenomenal pitcher, a better hitter, and could play any position. A thoroughly good teammate.”

After graduating from high school in 1960 he went to Hamilton’s McMaster University, where he played junior varsity his first year and varsity basketball for the next three years.

There he learned from coach Wes Hicks, whose insistance that coaching was teaching, influenced him more than anyone else. Hicks had been a student athlete at Mac when future CFL Hall-of-Famer Russ Jackson was there. Hicks preceded Jackson as QB of the team. “

He was probably the biggest influence on me as a coach,” says Baird.

With a letter of introduction from Ivor Wynne Wynne, himself a former Mac graduate, was athletic director at the school – in his pocket, he travelled to Australia and landed a teaching job in Sydney (Parramatta H.S.) for a year.

“It was one of the best high schools in Sydney.” Not only hadn’t he gone to teacher’s college, but he knew virtually nothing about cricket and rugby, two staples of the phys. ed. curriculum in Australia. In subsequent years he would make many trips back to Australia, and in 1987 was named Chef de Mission for Canada at the World Basketball Championships there. He hurt his knee in Australia playing in the senior basketball league.

Returning after his year abroad, the ship was just heading through the Red Sea when he was given a telegram sent from his father saying “Phys. Ed. and Geography available at GCl. Do you want it?”

Without even an interview, or having to prepare a resume, he said yes. In those days teaching jobs were readily available. At GCI he joined what was mostly an old staff, many of whom had taught him.

“I walked into the office the first day of school and Jean Dalmage, my former home room teacher in Grade 9, said: ‘Baird. Baird, after 33 years I say bless you.’” That’s how I started my teaching career, with a blessing from Jean Dalmage.”

With that blessing, so began a long career as a teacher and coach whose influence on the basketball scene in the city, and across the province, has been immense.

At Southwood, from 1987 to 1998, he coached many girls over their high school careers, including one core group of girls who won the Waterloo Regional title five straight years. Those championship years were highlights for both players and coaches.

A note from Lindsay Colven, who played on those teams, summed up Baird’s teaching and coaching career: “Mr. Baird, thank you for everything you have done you have dedicated to us over the years,” she wrote. “You are a great coach and an inspiration to us all. Best wishes in your retirement, We will miss you.” 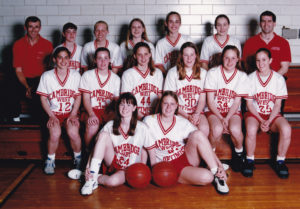 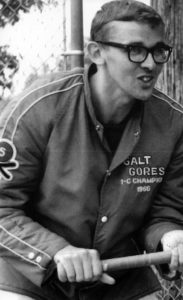