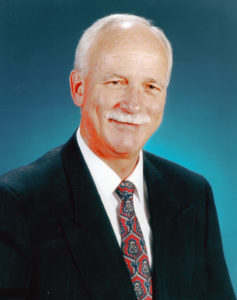 It was his work that brought Toronto-born John Rothwell to Preston in October 1966 (by way of London and Winnipeg), and from the start, he was impressed with what he saw.

On the move in those early years due to his job — he worked for K-Mart — soon after arriving in Preston a couple colleagues invited him to lunch.

“We’ve only got an hour,” replied Rothwell, wondering how they could make it to another city and return in time.

Galt was right next door to Preston, they said.

“I still remember coming down Water Street and turning left onto Main and it really hit me how nice the area was. It was bustling with people, and what got me was the oldness of it, but it was all sharp and clean.”

Little did he know then that Cambridge, as it was known a few years later, would become his permanent home.

His involvement in the sporting life of the community began soon afterward. Sports were a luxury he could ill afford as a youngster in Toronto — “We didn’t have two nickels to rub together in those days” — but he always had the desire to play.

Rothwell began his volunteer activities with the Galt Girls Softball Association when his daughter was playing in the league. At the league banquet, held at what is today Fifty’s Grill & Deli on Hespeler Road (the former Ponderosa), an appeal was made to parents for help.

Rothwell took up that call and has been volunteering with local sports organizations ever since.

“I still remember talking with myself to step forward and I said ‘Hey, I’ll help out.’”

Today Rothwell, who continues to serve in a variety of roles, has been a fixture in local sport for decades with several organizations.

Being inducted into the Cambrige Sports Hall of Fame is an honour that he never expected. “It’s a big deal and now it’s happening to me. You don’t do all this stuff for accolades, you just do it because you want to do it, and you enjoy it.”

He’s had to balance work, family life and  his volunteer activities for decades. It hasn’t been easy.

“From a coaching perspective, seeing the improvement in the kids makes it all worthwhile,’ he says. “I can think of one kid, for instance, who made me enjoy the game more with her enthusiasm. She was only 10 or 11, and the way she responded to my encouragement has stayed with me all these years.”

But it wasn’t just seeing improvement in skills, it was also the development of character that has left a lasting impression on him.

Along the way he got involved in so much more, like the Can-Amera Games. It was one of the highlights of his life.

“I went to the very first Can-Amera Games in 1972 as an assistant coach.” He had no idea that one day he would become Cambridge Can-Amera chair. That happened in 2004-05.

“Just the improvements in some of the facilities in town due to the Games have been impressive. Hats off to the people and politicians who had the foresight to do this. Back then, Can-Amera meant so much to the kids. The whole experience was incredible.”

His involvement with the Can-Amera committee began around the time Rothwell was serving as chair of the Cambridge Cup Softball Tournament. He approached someone from the City and asked if there was a way he could contribute on one of the larger committees.

“Kevin walked me into the Can-Amera meeting, which was being held upstairs in the Market building. I wound up helping Karen Pinchin in publicity. And bear in mind that I’d done nothing at that level before. Then, two weeks later Karen brought this cardboard box in and announced she was moving to Toronto.” Bob Howison was chair at the time.

All of a sudden, Rothwell was in charge of publicity. He plunged in and learned by doing.

One year Rothwell teamed with Joanne Wolstenholme and Jack Book to create a film about Can-Amera, which was shown in the 19th year of the Games. Every sport was filmed. “With our limited knowledge, it turned out great.” The film has long since been lost to time.

Through his years with Can-Amera, he’s served in a number of areas, including publicity, transportation, as a sport area coordinator and on the opening and closing ceremonies.

He’s also spent many years on the Cambridge Sports Awards committee, as well as with the defunct Cambridge Winter Hawks Jr. B team, a team he was with since its inception in 1982-83. And even before that, he was with the Shamrocks and the Preston Jesters.

His father-in-law, John Porteous, was the trainer with those early Jester clubs and, when Rothwell went out to a game, he was hooked. “The rink was full. It was just great.”

He was asked to do some announcing in the early 1970s, a chore he did well. Many thought his voice bore an uncanny resemblance to the Toronto Maple Leaf announcer.

Later, when he served on the executive with the Winter Hawks Jr. B team, his work schedule changed and for two years he had to work on Saturday nights. “I was still able to be on some committees, but couldn’t do hockey because they played Saturday nights.”

Eventually he was able to return to the Winter Hawks.  “I came back in 1997, and had a heart attack in December.”

After the team folded, amidst some controversy, in 2016-2017, he began helping out with the Hespeler Jr. C team.

He has been a member of the Sports Awards and the Sports Hall of Fame committees, as well as serving as coach and director in softball — he coached Cambridge Girls’ Softball for 14 years, including a four-year stint with the Cambridge Jr. ‘A’ Lions  in the South Western Ladies Softball League. He also gave of his time to local fastball, ringette and hockey organizations.

For seven years he was a travel team and house league coach with Cambridge Ringette and served as co-chair of the ringette tournament for a year. He was also coach and GM of the Cambridge Athletics Fastball team.

In the early years as a coach, Rothwell admitted going to the library to learn about the game and how to coach and do lineups. He tells the story about how Tim Turow, namesake of the Cambridge Athlete of the Year award and long a baseball coach, offered an opinion on Rothwell’s coaching abilities.

“He had watched one of our games — maybe the Cambridge A’s — and he told one of our players: ‘That coach doesn’t know anything about coaching ball.’ And,” laughs Rothwell, “he was right.” But Rothwell had the desire to learn.

Along the way he was also involved with the Cambridge Gores men’s team for several years, as a coach and general manager — and was GM of the Kitchener Evergreens Fastball team for a year.

He continues to be involved on the Cambridge Sports Hall of Fame committee, the Arthur White Sports Bursary Fund and the Waterloo Region Hall of Fame (on their sports selection committee).

“There have been some great people I’ve been fortunate enough to meet and get to know through all these activities over the years.”

Rothwell has always been eager to pitch in, and those who have come to know him have found a dependable and enthusiastic volunteer who is a pleasure to work with.

His wife Janet perhaps best sums up his involvement in local sports. “John throws himself into these things —- he goes all in — to the exclusion of all else.”

She knows better than most how many sacrifices there have been along the way, but helping out has been so ingrained in his makeup that even if he wanted to curtail or scale back his involvement in sport, he probably couldn’t.

So while he continues to seek that balance, it remains as elusive as ever.