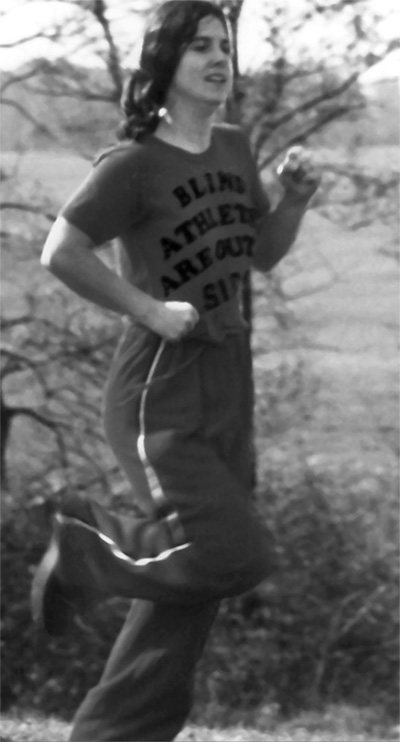 Lillian Burke’s climb to the champion- ship level in disabled track and field was an extremely rapid one. She began her athletic competition in 1975 and was a provincial record-holder by 1976. Amazingly, Lillian also became a Canadian champion that very same year.

Blind in one eye and with only four per cent vision in her other eye, she began competing in track and field while attending the W. Ross Macdonald School for the Blind in Brantford.

Later, within her first year of competing after high school, and with husband Cyril acting as her coach, Lillian won the high jump championship in the Ontario Games for the Physically Disabled. At the time, she won silver medals in the 100 and 400-metre races as well as javelin. She added bronze medals in discus, long jump, and the three-kilometre walk.

She did most of her training at the Southwood track, with Cyril at close hand.

When the Canada Games for the Physically Disabled were held in Cambridge (June 20-27, 1976), Lillian was only 20 years old. Her age and relative inexperience proved no handicap in another round of medal-winning performances. Lillian was the gold medalist in the discus, the silver medalist in the high jump, long jump and the 100 metres, and the bronze medalist in the javelin and 400 metres. These performances led to her being the only Cambridge selection to the International Olympiad for the Physically Disabled in July 1976.

A shortened training schedule due to the birth of her daughter Samantha did not impede Lillian when, in 1977, just two months after giving birth, she set a world record for the three-kilometre walk, bettering the old mark by an astonishing 71 seconds. Lillian continued her record of success for the next few years, highlighted by capturing one silver and two bronze at the World Games in England in 1979.

Burke was named Cambridge athlete of the year in 1978, and also won distinction as an Oktoberfest Woman of the Year.

She retired from competition in 1979.

In 1995 the mother of two – Samantha and Tanya – was inducted into her native Newfoundland’s Bell Island Sports Hall of Fame.